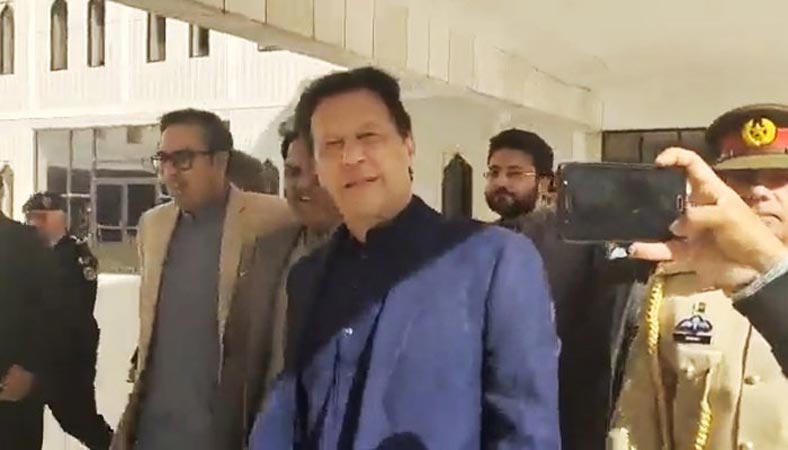 The Supreme Court on Wednesday directed the federal government to submit a report in four weeks on actions taken against those responsible for attack on Army Public School (APS) Peshawar, as it grilled Prime Minister Imran Khan over a recent ceasefire with the Tehreek-e-Taliban Pakistan

A three-judge bench headed by Chief Justice Gulzar Ahmed and comprising Justice Ijaz ul Ahsan and Justice Qazi Muhammad Amin Ahmed heard a suo motu case pertaining to the 2014 Army Public School massacre in Peshawar. During the course of proceedings, Prime Minister Imran Khan was summoned to explain the position of the federal government on the issue.

Justice Ijaz ul Ahsan remarked that the parents of the martyred children are demanding action against the then government. Justice Qazi Muhammad Amin Ahmed, speaking to Prime Minister Imran Khan, said, “You have brought the culprits to the negotiating table. Are we once again about to sign a surrender document?”

He was referring to a ceasefire agreement reached by the government with the banned Tehreek-e-Taliban Pakistan (TTP) – the militant group behind the attack. “You are in power. The government is also yours. What did you do? You brought those guilty to the negotiating table,” the bench remarked.

Responding to the question from one of the judges on the bench regarding progress of implementation of APS commission’s report, the prime minister replied that his party was in power in Khyber Pakhtunkhwa when the attack took place and the same night he had called a meeting of the Pakistan Tehreek-e-Insaf. He submitted that he had also met the injured students as well as the families of the martyred. A national action plan was chalked out after the APS massacre, he informed the bench.

After the Taliban’s government came into power, around two hundred thousand Afghans migrated to Pakistan, and out of them many were associated with ISIS, TTP and Baloch separatists who started terrorist activities inside Pakistan, said the prime minister, adding that the security agencies foiled many attempts of terrorist attacks.

Justice Qazi Amin reminded the prime minister that policeman were killed in Sadhoki during PTI’s government in Punjab. Did the government made any arrests? he questioned the PM.

He observed that there were reports that the government was negotiating with some group. He asked was it not the State’s job to go after and catch the true culprits?

The chief justice said that the families of the martyred wanted compensation from the government, adding that they wanted action against the officials in high-level positions at the time of the attack. He said that for the satisfaction of the parents who lost their children in the APS attack, action is necessary. He asked the federal government to listen to the stance of the victims’ parents. Justice Amin said that Pakistan was not a small country and it has sixth largest army in the world. The prime minister stated that he had a meeting with the parents of the children many times and was ready to meet them again. “I can understand the suffering and pain of the parents,” he added.

He said, he had opposed Pakistan’s involvement in the US war on terror during the tenure of former president Pervez Musharraf. He said that the people were in deep trauma, they were standing behind the army in the war against terrorism.

He asked find out why 80,000 people were killed. Upon this, the chief justice said that finding out about these things was his job as he was the prime minister. As the prime minister, he should have the answer to these questions, he added.

The prime minister told the chief justice that the government was in pain at the loss of lives in the APS attack. The court could constitute a high-level commission on the APS tragedy, he said, and added that he believed in supremacy of law and there was no sacred cow. He said all were equal before the law.

“Where do the intelligence [agencies] disappear when it comes to the protection of their own citizens?” the chief justice asked. “Was a case registered against the former army chief and others responsible?”

The attorney general replied that the inquiry report did not find anything related to the former army chief and former director general of the Inter-Services Intelligence (ISI). At this, CJP Gulzar remarked, “There is such a huge intelligence system in the country. Billions of rupees are spent on it. There is also a claim that we are the best intelligence agency in the world. So much is being spent on intelligence but the results are zero.” Justice Ahsan said the institutions “should have known there would be a reaction to the operation in tribal areas”. “The easiest and most sensitive target were children,” he added.

The apex court directed the government to submit its report within two weeks, but the AGP requested the court to grant additional time. Accepting the plea, the court granted four weeks to the government.