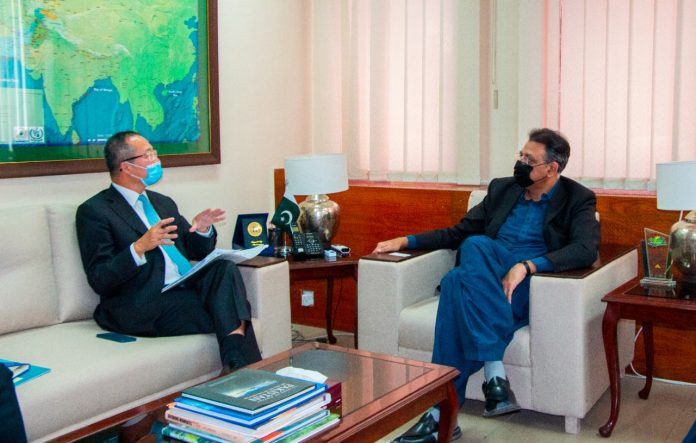 ISLAMABAD: Minister for Planning, Development and Special Initiatives Asad Umar, while appreciating the contribution of the World Bank in the socio-economic development of Pakistan, said on Tuesday that the incumbent government was committed to fast-track the various projects being funded by World Bank.

During the meeting, various infrastructure, energy, clean drinking water, drainage, education, health-related projects being funded by the World Bank came under discussion. Referring to the K4 project, the Minister said that the provision of clean drinking water and upgrading the drainage system of Karachi were among the top priorities of the Government.

The minister informed the delegation that due to effective measures taken by the government, the growth in circular debt was being curtailed by a considerable amount. He assured that the government was keen to reform the power sector in the country with a special focus on reducing circular debt.

He reiterated that the government was fully committed to implementing structural reforms, protecting social spending, and boosting social safety nets in order to protect the vulnerable segments of society. He further underscored the importance of World Bank assistance for the expansion and modernization of Pakistan’s electricity transmission system.

Stressing the importance of road connectivity for rural development, the Planning Minister emphasized that effective road networks promote access to social services such as health facilities and education. During the meeting, they also discussed the girl’s education ratio in KP and the facilities provided to them.

The Minister informed the delegation that the government was working to revamp the Pakistan Bureau of Statistics with the aim of modernization of statistical system and to enable it for high-frequency data generation. The PBS would also be conducting first digital census 2023, the Minister added. He said that the Government would welcome World Bank’s technical assistance in these areas. Asad Umar overall appreciated the World Bank’s support to Pakistan and highlighted the measures taken by the government to accelerate the completion of projects funded by the institution.