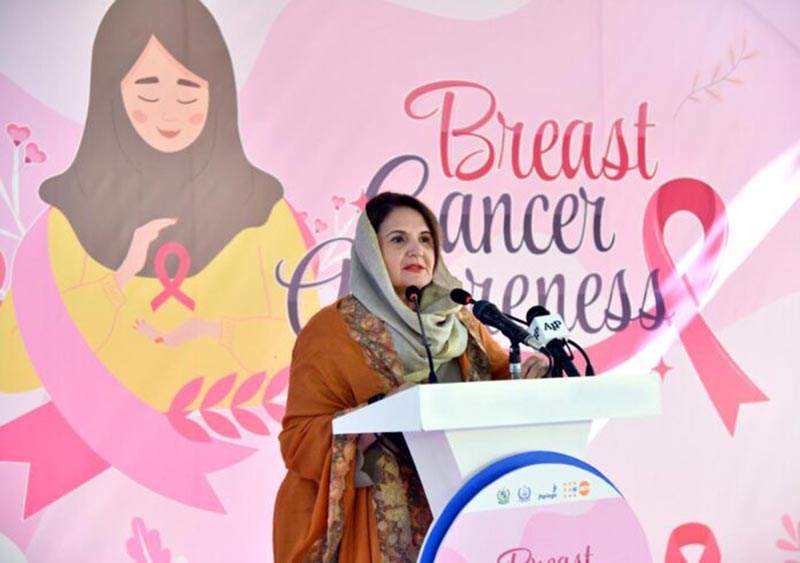 Begum Samina Arif Alvi Monday urged women to get to know the symptoms of breast cancer and practice every month the five-minute routine of self-examination.

Speaking at a breast cancer awareness event organized at Tarlai Rural Health Centre in Islamabad, she said diagnosis of the disease at the first stage had 98 percent chances of saving the patient’s life.

Begum Alvi said taking out five minutes every month was extremely important for a woman to detect any abnormality in the body followed by immediate medical assistance.

Expressing concern over the 40,000 deaths due to breast cancer every year, she said it was the time for the women to realize the gravity of the situation and be concerned about their health.

Begum Alvi emphasized on adopting a healthy lifestyle including a balanced diet and physical exercise to prevent breast cancer.

She called upon the women to spread the awareness message to at least 10 other women around them.

She lauded the government’s step to involve nurses and lady health workers in creating awareness on the issue and mentioned the immense support rendered by civil and military departments, welfare organizations, media and educational institutions in this regard.

He commended the efforts of Begum Samina Alvi in educating the womenfolk on breast cancer and the government’s initiative of universal health coverage for the people across the country.