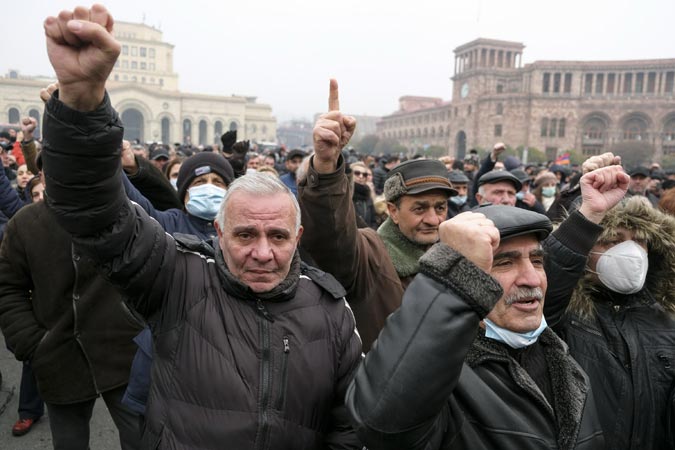 Thousands of Armenians rallied Monday to push Prime Minister Nikol Pashinyan to resign, a year after he signed a controversial truce with Azerbaijan that ended a war between the Caucasus neighbours.

The agreement — under which Yerevan ceded swathes of territories it had controlled for decades — was seen in Armenia as national humiliation and sparked weeks of street protests.

In June, Pashinyan called snap parliamentary polls which were won by his Civil Contract party.

“We declare today the start of a nationwide opposition movement,” IshkhanSaghatelyan, a leader of the opposition Dashnaktsutyun party, told the crowd. “Our movement’s goal is to stop the destruction of our state.”

Azerbaijan and Armenia have reported occasional exchanges of fire along their shared border over the last year, sparking fears of another flare-up in their decades-long territorial dispute.

Both Pashinyan and Azerbaijani President Ilham Aliyev have recently expressed readiness to hold talks on a definitive peace deal.

Ethnic Armenian separatists in Nagorno-Karabakh broke away from Azerbaijan as the Soviet Union collapsed in 1991, and the ensuing conflict claimed around 30,000 lives.