Polish pastry chefs vie to produce the most delicious croissants

* They're also a far cry from French croissants 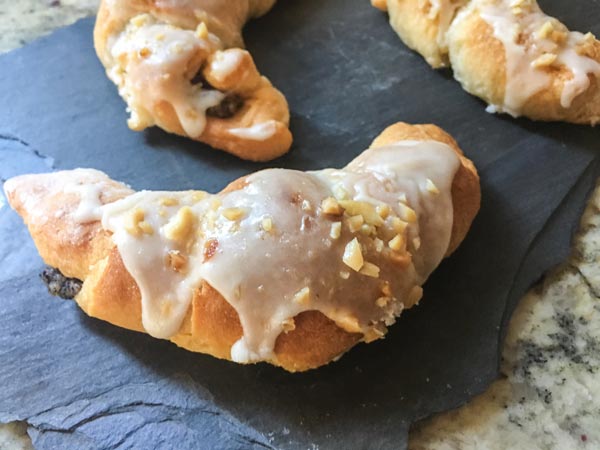 Are you counting calories? Then it’s best to avoid the cobbled streets of Poznan, where you’ll always be tempted by the rich aroma of freshly baked St Martin’s croissants.

The Polish delicacy has been granted the EU’s ‘Protected Geographical Indication’ status and can be made only by certified bakers in the town – though as there are about 100 of them you’re never far from their tasty treats.

They’re also a far cry from French croissants. The Poznan version are supersized curves of flaky pastry, liberally sprinkled with nuts and filled with dried fruit, and can easily pack 1,200 calories – about 1,000 more than a traditional croissant.

They’re wonderfully sweet and can somehow be both delicate and incredibly filling. I can devour only half of my first croissant before admitting defeat.

You can spot a nod to the croissants’ origins carved into an exterior wall of Poznan’s 16th Century St Martin’s Church, which shows the saint riding a horse and slicing off a swathe of his cape to pass to a cold, hungry beggar.

Centuries ago a local baker decided to honour this good deed by baking horseshoe-shaped croissants and distributing them to the poor. Others followed suit, handing them out to the needy on St Martin’s Day, which falls on November 11.

Today the croissant is Poznan’s most popular pastry and is served all year round. I get my first taste in the cafe of the Hotel Mercure Poznan Centrum.

The bakers have been using the same recipe since the cafe opened in the 1960s, and a pastry chef who has worked there for 40 years invited me into the kitchen for a masterclass. He starts by thumping down a ball of dough and proudly points out that there are 97 layers within it. Then he rolls the dough and slices it into triangles. With almost surgical precision, he makes a series of tiny incisions in each to ensure the filling will ooze through every layer. This is applied with an icing bag, squirting neat, thick lines of a sweet-smelling mixture of crushed poppy seeds, orange peel, nuts and almond essence with egg used as a binder.

Then he folds the dough into croissant shapes, lovingly tucking the pointed ends into place.

If it sounds simple, I can assure you it’s not.

And the filling mixture is incredibly thick – when I’m handed the icing bag it takes a good few minutes to squeeze out a single unappealing dollop.

As I leave, I pass the cafe’s head chef Grzegorze Dziamski, who has just taken delivery of two tons of locally grown organic poppy seeds for the run-up to November 11, which is also Polish Independence Day. His passion for pastry is obvious and he knows he has to produce the best. ‘At this time of year people buy from several different bakeries so they can choose their favourite for the holidays,’ he says.

The town even has a Croissant Museum where more hands-on classes are held and where experts will explain in greater detail about the ingredients and the traditions of the dish.

Poznan’s bakers also make wonderful bread. My favourite is from the tiny Czary Chleb bakery, set up by a former publisher with a love of high-quality ingredients and old-fashioned baking methods. It’s in what’s known as the cosmonauts’ neighbourhood, where you’ll also find a park with a huge statue dedicated to the first man in space, the Soviet pilot Yuri Gagarin.

There is, of course, more to this 1,000-year-old Polish city than pastries, bread and baking.

Set halfway between Warsaw and Berlin, it is stuffed with beautifully preserved buildings and is fast becoming a magnet for people wanting an arty, foodie and very trendy mini-break.

Head to the town square for pavement cafes, street performers and rows of very colourful, almost fluorescent Fish Sellers’ Houses. These were built in the 1500s, were carefully restored after the Second World War and are now the perfect backdrop for eye-catching photos.

There’s a museum inside the city’s Renaissance-style Town Hall, or simply join the crowds outside it every day at noon – that’s when wooden doors above its clock open and two very jolly-looking mechanical goats pop out and butt heads 12 times.

The Old Brewery nearby is also worth a visit, with vaults and halls that have been transformed into a shopping and arts centre. Walk further around the compact heart of the city and you can tour its two castles, enjoy cosy beer houses and, in the summer, join the crowds in music festivals or on the busy urban beach on the banks of the Warta River. But whatever the season, those St Martin’s croissants will revive even the most exhausted of travellers.