* Along with the photo, he wrote, 'My little brother Dwayne... the time has come' 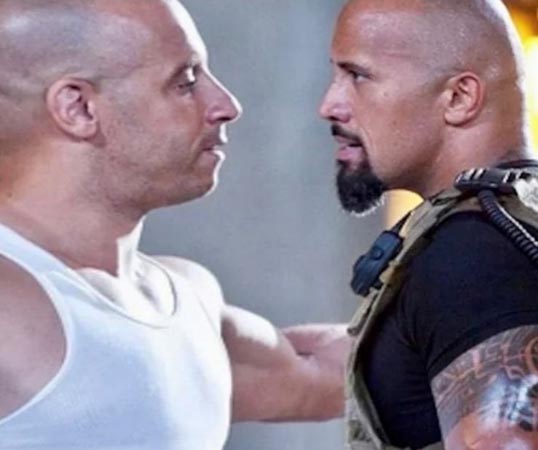 Action star Vin Diesel is hoping to end the feud between him and Hollywood star Dwayne Johnson. Taking to his social media platform, the Dominic Toretto depicter in ‘Fast and Furious’ publicly invited his co-star to return for the action movie franchise finale, reports aceshowbiz.com. Diesel posted a photo of his and Johnson’s characters, Dominic Toretto and Luke Hobbs, on his Instagram page.

Along with the photo, he wrote: “My little brother Dwayne… the time has come. The world awaits the finale of Fast 10. As you know, my children refer to you as Uncle Dwayne in my house. There is not a holiday that goes by that they and you don’t send well wishes… but the time has come.”

“Legacy awaits. I told you years ago that I was going to fulfil my promise to Pablo,” Vin continued.

He added: “I swore that we would reach and manifest the best Fast in the finale that is 10!”

Diesel went on to admit that he wrote his open letter “out of love.”

The “Guardians of the Galaxy” star then asked the 49-year-old actor to “show up.” He stressed: “Do not leave the franchise idle you have a very important role to play. Hobbs can’t be played by no other. I hope that you rise to the occasion and fulfil your destiny.”

The beef between the actors reportedly began in 2016 when Johnson called a few of his male ‘Fast and Furious’ co-stars ‘candy a**es’ and ‘unprofessional’ via Instagram.

It was later revealed he was talking about Diesel. A source also claimed that the two definitely clashed on set during filming.

In a recent Vanity Fair interview, Johnson himself admitted to regretting his past action, noting that he could have handled the situation better.

“It caused a firestorm,” he told the publication.

“Yet interestingly enough… as if every single crew member found their way to me and either quietly thanked me or sent me a note. But, yeah, it wasn’t my best day, sharing that. I shouldn’t have shared that.”

“At the end of the day, that goes against my DNA. I don’t share things like that. And I take care of that kind of bulls*** away from the public,” Dwayne further explained.

“They don’t need to know that… I meant what I said. For sure. I mean what I say when I say it. But to express it publicly was not the right thing to do.”

During the conversation, Johnson also unveiled that he met with Diesel to hash things out after the post went viral, but he said he didn’t “call it a peaceful meeting.”

The ‘Fast and Furious’ franchise will conclude with two more films.

The actor stated, “You know, like I said, the finale’s coming and ‘F9’ starts to align everything perfectly for the greatest finale in cinematic history.” The 10th movie is expected to start filming in January and scheduled to be released on April 7, 2023.