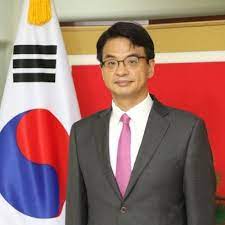 ISLAMABAD: Ambassador of the Republic of Korea Suh Sangpyo Monday said there were bright prospects for Pakistani skilled youth entering into Korean market as workforce, where Pakistan and Korea possessed great potential for enhanced bilateral ties in tourism, agriculture, and trade sectors.

In an exclusive interview with News and Current Affairs Channel of Radio Pakistan, he said currently 1,500 Pakistani students were studying in Korean institutes of higher learning in various technical and scientific fields, and many of them were on scholarships. He said due to pandemic restrictions, a further 1,200 Pakistani students could not go to Korea after securing admissions but they would reach there when the Covid restrictions were normalized. Suh Sangpyo said, “Korean government is providing assistance to set up an IT technology park in Pakistan to develop trained IT professionals in the country.”

He said IT Park constructions weare key projects of the Economic Development Cooperation Fund (EDCF) of South Korean government. In 2019, Korea signed the framework agreement with Pakistan to provide $500 million of EDCF loans that gave financial space for the construction of infrastructure in Pakistan. Korean Ambassador said Samsung was establishing a mobile phone manufacturing plant in Karachi where skilled Pakistani manpower will be employed to work in various departments.

Referring to historical ties between Korea and Pakistan, the ambassador said decades’ old bilateral relations between the two countries started in the 1960s and Seoul government borrowed Islamabad’s five-year plan for its economic development and successfully implemented it. The relations further blossomed in the following years and in the 1970s and 1980s the South Korean tourists started visiting Pakistan to pay pilgrimage to a number of Buddhist religious sites scattered across the country.

He said, “tourism is an area in which both Pakistan and Korea can increase their bilateral ties. Both countries recently signed a framework agreement to facilitate the entry of Korean tourists into Pakistan.”  On business relations with Pakistan, the envoy said South Korean business giants like LG, Daewoo and Samsung already have a strong presence in Pakistani market with household products. He said due to law and order situation many Korean companies had to move out from the country in 2000s. “But with the improvement in security environment, the situation is going to reverse in future,” he added.

Korean Ambassador said a number of Korean companies were interested in further investing in Pakistan’s lucrative market. He said Korean government was trying to increase its bilateral trade volume with Pakistan which currently stood at not so optimum level. Regarding Korean investment in Pakistan’s infrastructure, he pointed towards the building of Lahore-Islamabad Motorway in the 1990s which was a mega project.
He said, “In the energy sector, we are cooperating with Pakistani government in hydro power production.”

He said total investment in hydro power sector was around $4 billion in Jammu and Kashmir and Khyber Pakhtunkhwa which may increase in future. Suh Sangpyo said, “Pakistan can learn from Korean success in many areas including corporate and economic development, IT, water, and technical education.”He said recently, a Korean finance delegation visited Pakistan to explore areas of cooperation. The delegation signed various MoUs of cooperation in diverse fields with Pakistani government.