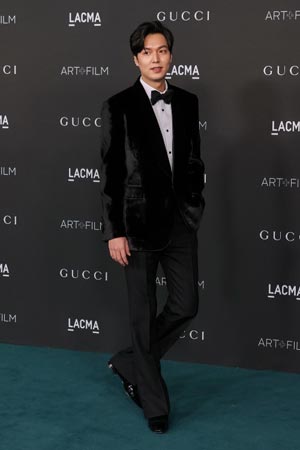 Fans of South Korean actor Lee Min-ho were left screaming after the Pachinko actor not only waved at them from his car but also greeted them with folded hands at the Los Angeles County Museum of Art (LACMA) Art + Film Gala.

Lee Min-ho was one of the many stars who attended the gala’s 10th annual edition. South Korean actors Park Hae-soo, Lee Byung-hun and Jung Woo-sung, who were recently seen in Squid Game, also attended the event.

Fans thronged to the venue to catch a glimpse of Lee Min-ho. In videos shared online, fans were quick to notice his car at the venue and immediately began chanting his name. Seeing his fans assemble, Lee Min-ho waved at them from inside the car.

As he walked the red carpet, Lee Min-ho noticed another group of fans and this time, he took a moment to greet them properly. He met them with folded hands, stood for a few moments to look at them and then waved them goodbye before entering the venue.

The gala this year honoured filmmaker Steven Spielberg. Kehinde Wiley and Amy Sherald, portrait artists for President Barack Obama and first lady Michelle Obama, were also honoured at the event. According to Variety, the gala coincided with The Obama Portraits Tour and Black American Portraits.

The actor wrapped up the shoot of his upcoming Apple TV+ show Pachinko earlier this year. Based on the novel of the same name by Min Jin Lee, Lee Min-ho plays the role of Hansu in the show.

The actor shot the series in South Korea last year and wrapped up another leg of the shoot in Canada this year.