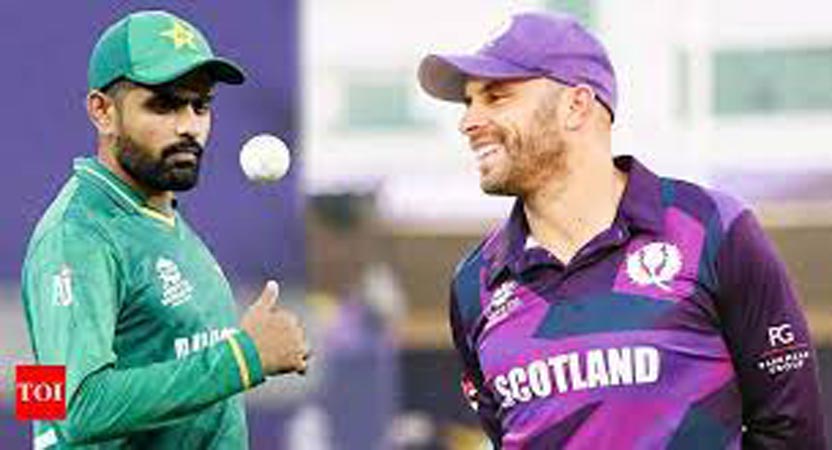 Former champions Pakistan are all set to overwhelm their opponents when they take on minnows Scotland in their last Super 12s Group II match of the T20 World Cup in Sharjah, United Arab Emirates on Sunday (today). Pakistan have won all their three previous T20Is against Scotland, once in the inaugural T20 World Cup in South Africa in 2007 and two in Scotland in 2018. Pakistan, who had claimed the title in 2009 edition under Younus Khan, have been simply sensational in the ongoing tournament so far and have registered four dazzling and convincing victories against India, New Zealand Afghanistan and Namibia in their Group to seal a place in the semifinals. If archrivals India were blown away by 10 wickets, New Zealand were outclassed by five wickets, in the team’s first two matches. Afghanistan did make life difficult for it for a while, but Asif Ali deposited four sixes in six balls to bail it out before Pakistan sealed the semifinal spot with a 45-run win over Namibia in their last match.

All those victories, which garnered immense appreciation from all and sundry, highlighted Pakistan’s balance of pace and spin in particular that played big parts in the outcome of the games. Pakistan have far more opportunities and are a far better team than anyone else. They have all the right ingredients. Pakistan’s openers Babar Azam and Mohammad Rizwan have been on fire, and when they failed to do the job, their middle-order rose to the occasion, while six-hitting machine Asif has proved to be one of the best finishers in the tournament so far. Although they have contributed, the likes of Fakhar Zaman, Mohammad Hafeez and Shoaib Malik will hope to be more consistent and look to stay till the end. In the bowling department, the pace duo of Haris Rauf and Shaheen Afridi have been their best bowlers so far, while spinners Imad Wasim and Shadab Khan, too, have done the job asked of them. The only worrying thing will be the form of seamer Hasan Ali, who has gone for runs. With the semifinal spot assured, Pakistan might look to rest a few players and give others opportunities in the inconsequential match today.

‘No fear of anyone’: Meanwhile, veteran all-rounder Mohammad Hafeez on Saturday said such was Pakistan’s form at the Twenty20 World Cup they were brimming with confidence and had no preferences as to who they played in the semi-finals. Hafeez – a former captain of the Twenty20 side – said Pakistan were ready for any opponent. “To be honest, when it comes to a cricket match we don’t think about who we want to play,” said 41-year-old Hafeez on Saturday on the eve of their match with Scotland. “Whoever comes we are ready for that as our confidence is high, we are shaping up well and we are performing well. But first we have a game against Scotland so we need to take them on with the same intensity and confidence. The goal is to win the Cup for the nation and we are close to that,” he said.

Hafeez said there was extra satisfaction over their strong performances considering the tricky lead-up they had to the tournament. “We played only one match out of five in the West Indies due to the weather,” he said. “Then New Zealand and England abandoned their tours so we were short on that front but the whole team and the management have done well in this tournament.” Hafeez singled out the first match against India as the confidence booster – Pakistan’s first win over them in 13 World Cup matches. “In any tournament when you win the first match, it gives you confidence so when we beat India it lifted our confidence hugely.

For Scotland, it will be an uphill task, but they are hoping to put up a better show than their last match and end things on a positive note. Scotland won all three matches to qualify for Super 12s but crashed out after losing the last four games. The eight-wicket loss to India on Friday night has been the most difficult to digest, but skipper Kyle Coetzer hopes the interaction with Indian players, including skipper Virat Kohli and Rohit Sharma, in Dubai, will inspire the team to put up a good show against Pakistan.

Coetzer has urged his players to give it their best shot in their last Twenty20 World Cup match against Pakistan. “We’ve got to make sure we go in there with as much confidence as we possibly can do,” said Coetzer on Saturday. “We’ve got one last crack of the whip while we’re out here. We’re not going to play together again until April probably. What better game and what better team to play against than Pakistan. They’re at the top of their game at the moment. That’s just an ultimate test and to challenge yourself against them,” said the Scottish skipper.