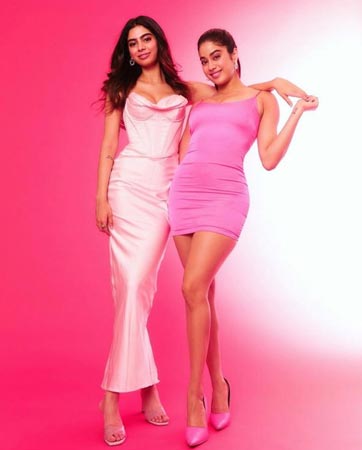 On the occasion of Khushi Kapoor’s birthday on Friday, her sister and best friend Janhvi Kapoor celebrated her special day in the most special manner. She has shared a series of pictures on her Instagram handle wishing her little one in order to make her feel special. The party was attended by Suniel Shetty’s son Ahan Shetty, Anurag Kashyap’s daughter Aaliyah Kashyap and Bhumi Pednekar among others.

Sharing some jaw-dropping pictures from the venue, Janhvi can be seen happily posing with her little sister and closed ones.

Sharing the pictures she wrote, “HBD my laddoo baby.” In the pictures, Janhvi can be seen dressed to impress in a cute pink mini dress while Khushi opted for a pastel colour gown and the duo looked ravishing as always.

Not only that, Khushi also shared some pictures on her social media account from her special day. In the pictures, Khushi is all smiles while posing for the shutterbugs.

She is even joined by her girl gang for the photoshoot.

On the work front, Janhvi was last seen in the horror-comedy ‘Roohi’, alongside actors Rajkummar Rao and Varun Sharma. Her next films include ‘Dostana 2’, which was originally slated to feature actor Kartik Aaryan. The film’s revamped cast is yet to be confirmed. She will also appear in the film ‘Good Luck, Jerry’.