* From Paris to Sydney, Nairobi to Seoul, dozens of events are planned worldwide to demand immediate action regarding climate change 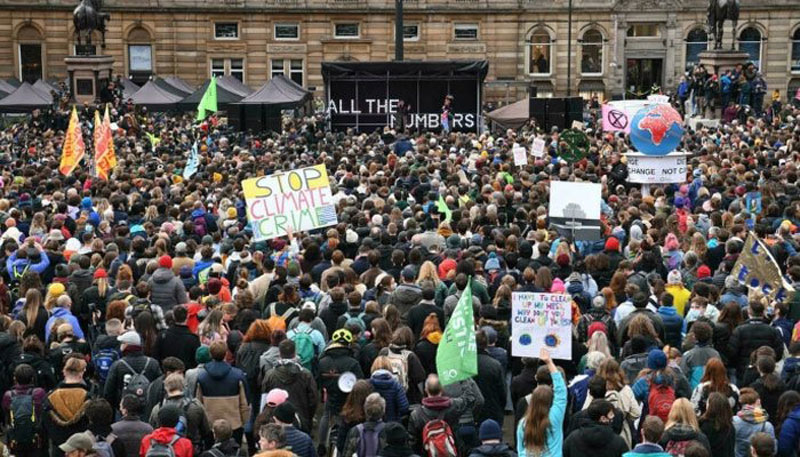 Thousands of climate protesters braved rain and wind in Glasgow on Saturday to take part in worldwide demonstrations against what campaigners say is a failure of crunch UN talks to act fast enough to tame global warming.

Dozens of events are planned worldwide to demand cuts in fossil fuel use and immediate help for communities already affected by climate change, particularly in poorer countries.

In Glasgow, organisers and police said they ultimately expected up to 50,000 people to parade through the streets of the Scottish city. Demonstrators began gathering on Saturday morning in a park near the COP26 summit venue, chanting: “Our world is under attack, stand up fight back!”

“I think a lot of politicians are scared of the power of this movement,” said a 22-year-old Norwegian protester who gave her name as Jenny.

Delegates from nearly 200 countries are in Glasgow to hammer out how to meet the Paris Agreement goals of limiting temperature rises to between 1.5 and 2 degrees Celsius. At the halfway stage of the COP26 negotiations, some countries have upgraded their existing pledges to reduce greenhouse gas emissions, while there have been separate deals on phasing out coal, ending foreign fossil fuel funding, and slashing methane.

The promises followed a pre-COP26 estimate from the UN that said national climate plans, when brought together, put Earth on course to warm 2.7C this century. With just 1.1C of warming so far, communities across the world are already facing ever more intense fire and drought, displacement and economic ruin wrought by global heating.

And a major assessment last week showed global CO2 emissions were set to rebound in 2021 to pre-pandemic levels.

Swedish campaigner Greta Thunberg said the summit had gone nowhere near far enough in a speech at Friday’s youth march in Glasgow, where she labelled the conference “a failure”.

In Australia on Saturday, protesters in Sydney and Melbourne – some dressed as lumps of coal or Prime Minister Scott Morrison, a vigorous defender of the mining industry – echoed that sentiment, calling the talks “a sham” and their national leader “an absolute embarrassment”.

About 1,000 people gathered in London outside the Bank of England with placards reading “Less talk more action” and “No More COP outs”.

And protesters gathered outside Paris city hall carrying a giant banner that said: “Climate inaction = crimes against the living”.

Jill Bird, 66, who had travelled to Glasgow´s march from Bristol, was among a group of people dressed in white jumpsuits with “greenwash busters” backpacks. She said she wanted to see rich nations live up to their pledge of providing $100 billion annually to vulnerable nations that “keeps being promised and promised and promised and doesn´t actually materialise”.

Security has been boosted in Glasgow and many city-centre shops closed for Saturday’s march, which had a party atmosphere replete with dance troupes, drummers, bagpipers and a singing Darth Vader.

“Thousands of us are marching right across the world today to demand immediate and serious action,” said Scottish activist Mikaela Loach.

“We’re clear that warm words are not good enough – and that the next week of talks must see a serious ramping up of concrete plans.”

COP26 negotiations will continue on Saturday before pausing on Sunday ahead of what is shaping up to be a frantic week of shuttle diplomacy, as ministers arrive to push through hard-fought compromises.

Countries still need to flesh out how pledges made in the Paris deal work in practice, including rules governing carbon markets, common reporting timeframes and transparency. Dan Blumgart, 33, was at London´s protest holding a “Mars sucks, save Earth” placard.

“Because I really like the planet we live on and I want it to be, you know, able to keep it okay to live on,” he said.