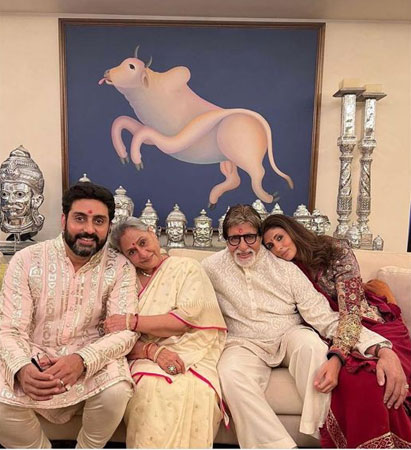 Bollywood megastar Amitabh Bachchan and his family had an intimate Diwali celebration this year, at their Mumbai residence Jalsa.

Amitabh’s daughter Shweta Bachchan posted a family picture where she posed with her parents, Amitabh and Jaya, and her brother Abhishek Bachchan. However, Aishwarya and her daughter Aaradhya Bachchan were missing from the frame. In the photo, Shweta, dressed in a maroon saree, is seen sitting next to her father Big B and resting her head on his shoulder. Her mother, who is seated between Amitabh and Abhishek, is seen holding her son’s arm and leaning on him.

Shweta’s daughter Navya Naveli Nanda also shared a few pictures of herself donning a light pink lehenga on Instagram. In the photos, Navya is seen sitting on an exquisite silver chair, which gained quite some fan attention the last time she shared a few pictures from Jalsa. “Piche wali table silver plated hai kya,” a few fans had asked Big B’s granddaughter.

On the work front, Abhishek is currently shooting for his upcoming thriller film titled ‘Bob Biswas’ in which, he will be seen playing the character of an insurance agent, who is living the double life of a contract killer. The film is a spinoff of the 2012 movie ‘Kahaani’, which had Vidya Balan in the lead role. Aishwarya, who was last seen in ‘Fanney Khan’, has Tamil film ‘Ponniyin Selvan’ in her kitty.

Megastar Amitabh has been busy hosting the 13th season of ‘Kaun Banega Crorepati’. Speaking of films, he will be seen in ‘Good Bye’, ‘Brahmastra’ and ‘The Intern’ remake.