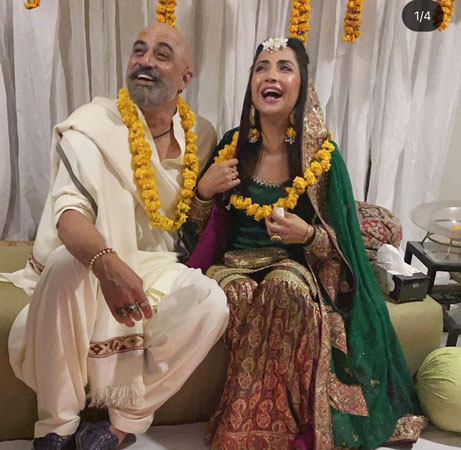 Actress Zara Tareen and American-Pakistani actor Farhan Tahir are ready to tie the knot soon as Tareen’s younger sister shared a thread of photos of their Mehndi event.

Congratulations are in order for the actors who are going to tie the knot soon. Zara Tareen’s younger sister Hira shared photos in which Zara was seen sitting with her husband-to-be in a Mehndi outfit.

Zara Tareen wore a claret-red lehnga on the occasion while Farhan wore a boski kameez shalwar with a shawl.

Hira Tareen on her Instagram wrote, “The festivities begin for the wedding of my beautiful sister Zara @ztareen and equally beautiful and awesome human being my Jijoo @faran.tahir Two loving families unite. May Allah bless us all!” The American-Pakistani actor Farhan Tahir was known for Captain Robau’s role in Star Trek and Raza in Iron Man. He also acted in several Hollywood movies including Elysium and Escape Plan.