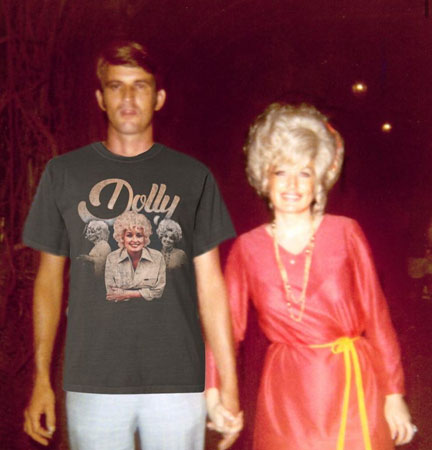 To love him is to post him! Dolly Parton sent social media into a frenzy when she dedicated her latest post to her longtime love, Carl Dean, who she has famously kept very private.

“Find you a partner who will support you like my Carl Dean does,” the 75-year-old wrote. Dolly shared a throwback photo of her husband holding her hand as they looked toward the camera.

In a hilarious twist, the country music legend photoshopped a T-shirt with her face on it, from her latest collection, onto her hubby. The Internet was equal parts surprised and amused by Dolly’s decision to post her man on her main account. “Dolly Parton doing a husband reveal after 50+ years is so iconic,” one user wrote.

“Dolly Parton’s soft launch of her husband of 55 years is so iconic,” another user tweeted. While fans couldn’t get enough of the sweet reveal, they were also shocked to see that Carl is easy on the eyes.

Dolly and Carl Dean got married in 1966. In 2016, the pair celebrated their 50th wedding anniversary by renewing their vows, a move that she jokingly admits made her Carl’s “second wife.”

In 2020, the humanitarian, actress and 11-time Grammy winner opened up about her husband’s decision to support her from the background. “I know, a lot of people have thought that through the years because he does not want to be in the spotlight at all,” she told Entertainment Tonight.

“He just hates that. It’s just not who he is. He says, ‘I didn’t choose this world, I chose you, and you chose that world. But we can keep our lives separate and together.'”

Dolly and Carl Dean are #CoupleGoals.