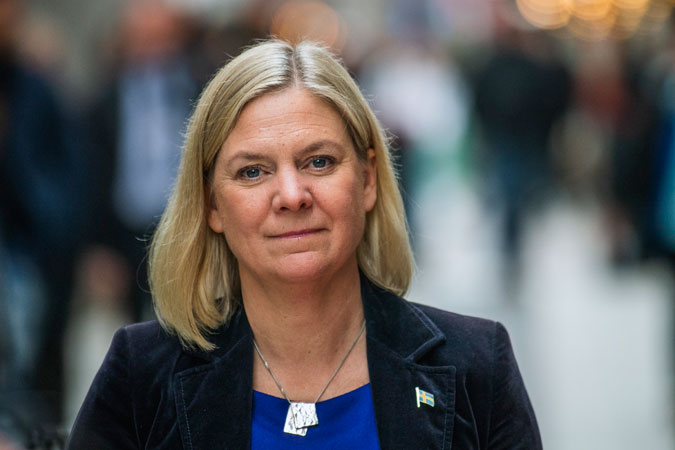 Sweden inched towards getting its first woman prime minister as left-wing politician Magdalena Andersson, dubbed the “bulldozer”, was elected head of the main ruling party on Thursday.

The 54-year-old finance minister and heir apparent to Swedish Prime Minister Stefan Lofven will face a fight for political survival as she takes the reins of the Social Democrats ahead of combative general elections scheduled for September 2022.

The only candidate standing, the academic and former competitive swimmer was confirmed by a vote at the party’s annual congress, this year held in the city of Gothenburg.

Lofven has announced he will resign after she becomes party leader, albeit with no timeframe. When he goes, the only thing standing between Andersson and making history as the first woman to form a Swedish government is a vote in parliament.

The feat almost sounds anachronistic in a country that has long championed gender equality, but which has at times cursed senior women in politics.

Anna Lindh, foreign minister and fellow Social Democrat, died after a stabbing attack in a department store in 2003.

Mona Sahlin, the first woman to head the Social Democrats and a deputy prime minister, was sidelined first by a spending scandal in 1995 that involved Tobleronechocolate, and later resigned in 2011 after electoral defeat.

The job could yet prove a poisoned chalice — she will be tasked with trying to keep her party in power at a time when it is close to its historic-low approval ratings.

Andersson describes herself as a “nice, hard-working woman” who likes to be in charge.

In political circles, she has built a reputation for bluntness that can rub some people the wrong way in a country where politeness is the law of the land.

A recent programme profiling her on public television channel SVT was entitled “The Bulldozer”.

“People even say they are scared of her which is kind of funny,” said Anders Lindberg, political editor-in-chief of Swedish daily Aftonbladet, which describes itself as independent social democratic.

“These kind of elite political scientists or professors of economics saying that they are afraid of her,” he added.

Finance minister under Lofven for seven years, in Brussels she defended fiscal restraint when Sweden joined Austria, Denmark and the Netherlands as the “frugal four” who counselled a more restrained European Covid-19 recovery plan.

She is a close friend of Lofven but comes from a different background to the former welder turned prime minister.

Born in the university town of Uppsala, she is the only daughter of a university professor and a teacher who first made a name for herself in the water, where she twice won gold in the Swedish national junior championship.

In parallel with studies at the Stockholm School of Economics — and a spell at Harvard — she immersed herself in the life of a “sosse”, having joined the Social Democrats’ youth league aged 16. In 1996, she became an aide to Prime Minister Goran Persson.

“I think she’s very keen now to present herself as being someone who has done the footwork… But of course she is a from an academic elite,” Jonas Hinnfors, a professor of political science at the University of Gothenburg, told AFP.

The mother-of-two married to a professor enjoys mountain climbing and heavy metal band System of a Down.

Still relatively unknown to the general public, she will have less than a year to put herself on the map to avoid a fleeting hold on power.

She may also battle to prove that she is her own person, rather than a third iteration of the Lofven government, Lindberg believes.

“That will be the narrative conflict in the Swedish election,” he said.