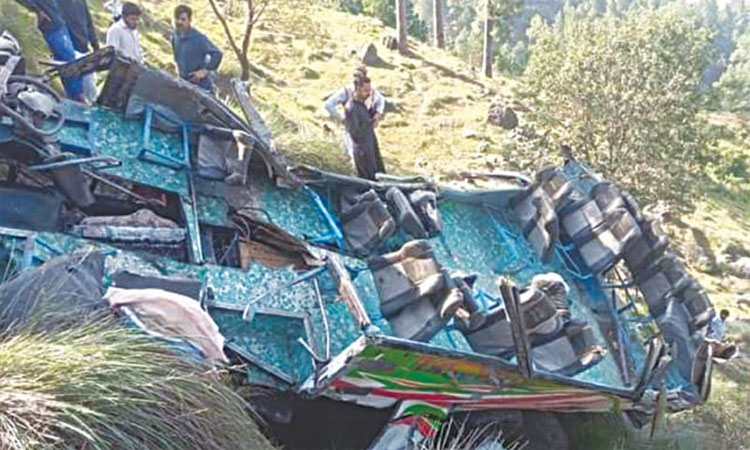 At least 22 people including children were killed on Wednesday when a bus plunged into a ravine in Azad Jammu and Kashmir, officials said.

“The bus carrying up to 40 passengers was going to Rawalpindi when it plunged into a deep ravine while negotiating a sharp turn,” local disaster management authority official Raja Moazzam told AFP. He blamed speeding for the accident and said “authorities are trying to retrieve bodies and injured from the wreckage”. Another local administration official also confirmed the accident and put the toll at 23.

The 40-seat coaster had started its journey from tehsil headquarters Baloch and after hardly seven kilometres developed a technical fault, according to some witnesses, who said the vehicle first hit the mountain on the left side of the road and then suddenly turned right and fell more than 500 metres down the road.

A man who was selling pakoras under a tent nearby saw the bus plunge and informed a prayer leader in Majhiari village, some two kilometres towards Baloch, over telephone about it. The prayer leader then made announcements on the loudspeaker asking villagers to rush to the accident site to aid in the rescue.

Poonch Deputy Inspector General Rashid Naeem Khan said 22 people had died in the accident. He said five of the injured were sent to Kotli district, while three were transported to Baloch.

Sardar Farooq Ahmed Tahir, a former AJK minister in the previous PML-N government, who rushed to the scene along with rescuers, said 21 bodies had been recovered from the accident site, while one of the injured succumbed to his injuries in the Baloch Rural Health Centre. Fatal road accidents are common in the country, especially in rural areas where conditions of roads are decrepit.