Zahir Jaffer removed from courtroom after hurling obscenities at judge 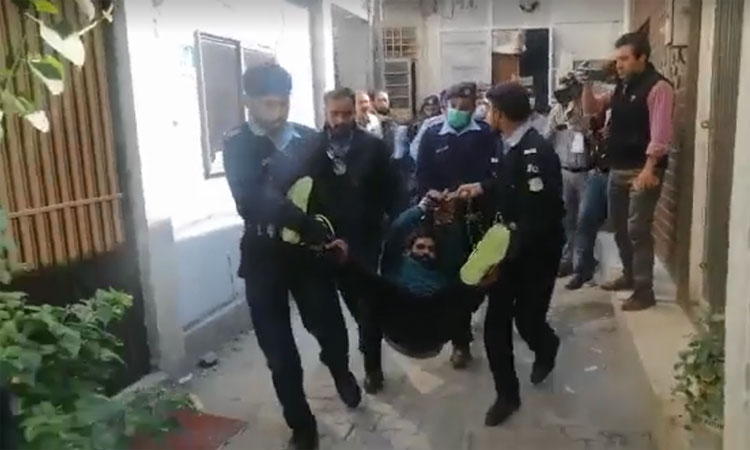 Zahir Jaffer, the primary suspect in the Noor Mukadam murder case, was forcefully removed from a sessions court in Islamabad by police on Wednesday after he disrupted proceedings and hurled obscenities at the judge, a private TV channel reported.

During the hearing, which was presided over by Additional Sessions Judge Ata Rabbani, all suspects in the case – Zahir, his parents, Zakir Jaffer and Asmat Adamjee, their three household staff, Iftikhar, Jan Muhammad and Jameel, and six Therapy Works employees, identified as Tahir Zahoor, Amjad, Dilip Kumar, Abdul Haq, Wamiq and Samar Abbas – were presented in the court. Shortly after the hearing started, Zahir started saying the name Hamza out loud, directed at no one in particular. When the judge asked police officials to remove Zahir from the courtroom due to his behaviour, he hid behind the door.

Zahir disrupted the proceedings again a few minutes later, demanding to be heard. “This is my court. I want to say something,” he said. “Everything of mine is at stake. Such an activity will be a sign of an unsuccessful state,” he claimed. He also lashed out at the court and hurled obscenities at the judge. “This court is nothing but dirt. This court is dragging this because they have no power. I have never seen something more fake.

“I’m giving you guys an opportunity to hang me but still you guys are dragging it. This all is a puppet show […] I have never seen more incompetent people in a room in my entire life,” he continued. Following Zahir’s outburst, the judge directed police officials to take him away, terming it a “drama”. As the police moved to restrain him, Zahir grabbed Inspector Mustafa Kiani by the collar.

Video footage of the incident showed policemen dragging Zahir out of the courtroom. After he kept on resisting, four policemen carried Zahir out and took him back to the lockup.

Judge Rabbani said he would not issue a contempt notice to the suspect but would start conducting the trial in jail.

The court summoned medico-legal officer Dr Jahanzaib – who conducted the autopsy on Noor’s body – crime scene in-charge Imran and two witnesses for the defence – Sikandar Hayat and Sikandar Ali – in the next hearing on Nov 10.

Case background: Noor, 27, was found murdered at a residence in Islamabad’s upscale Sector F-7/4 on July 20. A first information report (FIR) was registered the same day against Zahir, who was arrested from the site of the murder, under Section 302 (premeditated murder) of the Pakistan Penal Code on the complaint of the victim’s father, Shaukat Ali Mukadam.