Ethiopian capital could fall in ‘months if not weeks’: rebels 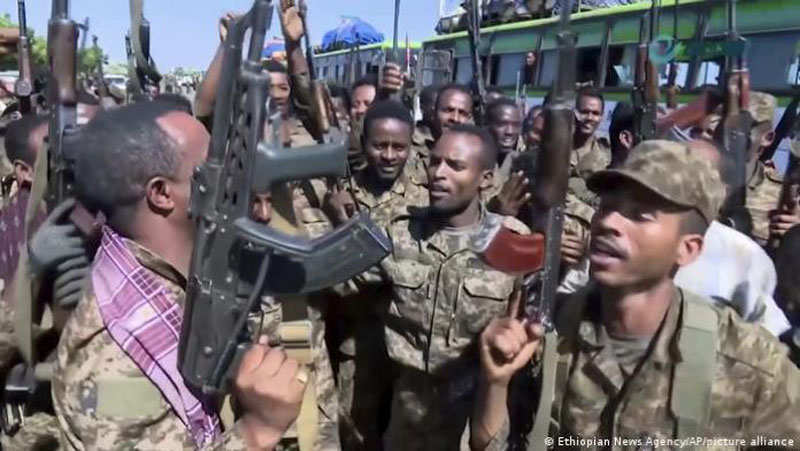 Ethiopia’s capital Addis Ababa could fall within “months if not weeks”, an Oromo group allied with Tigrayan rebels told AFP Wednesday, as the fighters advanced southwards.

The Tigray People’s Liberation Front (TPLF), which has been fighting Prime Minister Abiy Ahmed’s government for a year, has claimed significant territorial gains in recent days, along with its ally the Oromo Liberation Army (OLA).

As fighting has dragged on, reports of massacres, mass rapes and a starvation crisis have emerged, with the UN rights chief on Wednesday denouncing the extreme brutality on display, after a joint UN-Ethiopian report warned of possible “crimes against humanity” by all sides.

“If things continue in the current trajectory, then we are talking about a matter of months if not weeks,” he said, referring to OLA’s move on Addis Ababa.

The comments came hours after Ethiopia declared a nationwide state of emergency Tuesday and ordered residents of Addis Ababa to prepare to defend their neighbourhoods.

In a statement released Wednesday, Abiy urged citizens to support the war effort and accused the rebels of trying to turn Ethiopia into Libya and Syria, adding: “They are set to destroy a country — not to build it.”

Under the state of emergency, authorities can conscript “any military-age citizen who has weapons” or suspend media outlets believed to be “giving moral support directly or indirectly” to the TPLF, according to state-affiliated Fana Broadcasting Corporate.

In the capital, anxious residents voiced support for the government’s measures.

“They are enemies of Ethiopia and they need to (be) dismissed, and to do that all of us need to cooperate with the state of emergency,” said Azmeraw Berhan, a self-employed man.

But TPLF spokesman Getachew Reda said the measures amounted to a “carte blanche to jail or kill Tigrayans at will”.

“While the regime is teetering on the brink of collapse, #Abiy & his lieutenants are unleashing a reign of terror with a vengeance,” he tweeted Wednesday.

‘Crimes against humanity’: A joint investigation by the office of UN rights chief Michelle Bachelet and the Ethiopian Human Rights Commission (EHRC) published Wednesday found evidence of “serious abuses and violations” by all sides in the conflict.

“The gravity and seriousness of the violations and abuses we have documented underscore the need to hold perpetrators accountable on all sides,” Bachelet said.

The report, which covers the period from November 3, 2020, through June, pointed to extra-judicial executions, endemic torture and sexual violence among other abuses, and said that “a number of these violations may amount to crimes against humanity and war crimes”.

It detailed reports of gang rapes by various parties against women and girls, as well as men and boys.

It also recorded the deaths of at least 29 civilians in shelling by federal forces targeting Tigray’s capital Mekele on November 28, as well as revenge killings in Mai-Kadra following the town’s capture by Ethiopian and Amhara forces after a massacre of ethnic Amhara residents last year.

Abiy said the report presented no evidence of genocide but Bachelet said the findings were not so clear-cut and called for further investigation.

International alarm: Abiy sent troops into Tigray a year ago in response, he said, to TPLF attacks on army camps.

The 2019 Nobel Peace laureate promised a swift victory, but by late June the rebels had retaken most of Tigray and expanded into the neighbouring regions of Afar and Amhara. In recent days the TPLF has claimed control of two key cities in Amhara, about 400 kilometres (250 miles) north of Addis Ababa.

The government has denied claims of TPLF territorial gains which, if confirmed, would represent a major strategic advance.

Much of northern Ethiopia is under a communications blackout and access for journalists is restricted, making battlefield claims difficult to verify independently.

The escalating conflict has sparked alarm among the international community, with thousands killed and hundreds of thousands forced into famine-like conditions, according to the UN.

The African Union, which is headquartered in Addis Ababa, expressed “deep concern” and urged all parties to work toward a resolution.