Kristen Stewart engaged to Dylan Meyer after two years together 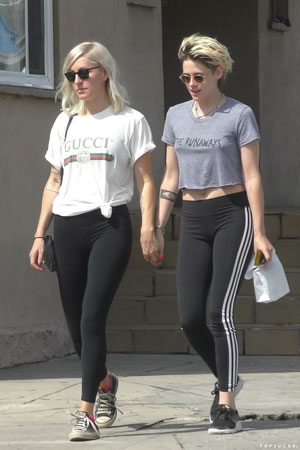 This angel has found her forever partner in crime: Kristen Stewart and Dylan Meyer are engaged! The Charlie’s Angels alum and the screenwriter put a ring on it after dating for nearly two years, the actress confirmed to Howard Stern on No. 2. Stewart, who will soon appear as Princess Diana on the big screen, seems ready to have a royal wedding of her own.

“We’re marrying, we’re totally gonna do it,” Stewart said on SiriusXM’s The Howard Stern Show. “I wanted to be proposed to, so I think I very distinctly carved out what I wanted and she nailed it. We’re marrying, it’s happening.”

In May, the pair were spotted holding hands in Los Angeles, around the same time that Meyer revealed she was moving out of her home of 10 years. “This spot felt like a true palace to me, even though it was basically a pile of sticks scotch taped together,” she wrote on Instagram. “This was the place where I really grew up… We filled that place with unbelievable quantities of love.”

The month prior, the Moxie writer penned a sweet 31st birthday message to her future wife. “Life sure is sweeter with this cute little family. Happy birthday, kiddo. You knock my socks off,” she wrote alongside a pic of Stewart and their dog.

It seems the duo has been ready to walk down the aisle for some time. The news of their engagement comes more than a year after Stewart told Stern she couldn’t “f–king wait” to propose to Meyer. “I think good things happen fast.”

In May, the pair was spotted holding hands in Los Angeles, around the same time that Meyer revealed she was moving out of her home of 10 years. ‘This spot felt like a true palace to me, even though it was basically a pile of sticks scotch taped together,’ she wrote on Instagram

In fact, she had an elaborate proposal already planned, though she remained tight-lipped in case Meyer was listening. As she shared on The Howard Stern Show in 2019, “I have a couple plans that are, like, just the coolest things to do. It’s pretty undeniable.”

She wanted to go all out for The One. “When you know, you know. You know what I mean?” Stewart gushed of her “brilliant” girlfriend. “There is nothing like feeling sure about anything, because we don’t know anything. And that is the only thing you can feel like you know, is that if you’re in love with someone.”

According to Stewart, she first met Meyer about eight years ago on a movie, but they didn’t reconnect until six years after that. “She rocked up at a friend’s birthday and I was like, ‘Where have you been and how have I not known you?'” the BAFTA award winner said.

Two weeks after meeting her, she told Meyer she loved her at a “s–tty bar” late at night. She recalled, “Her friends were there or whatever. They walked out and I was just like, ‘Aw man, I’m so f–king in love with you.’ Like, done.”

The couple were first seen together publicly in August 2019, while sharing an intimate embrace following Stewart’s split from model Stella Maxwell. “Kristen is spending time with Dylan and very happy about it,” a source told E! News at the time. “She was seeing Stella for a little bit while it worked, but now she has moved on with Dylan.”

“Kristen isn’t holding back at all and loves being with her,” the insider continued. “They are moving quickly and always together.”

K.Stew, who dated her Twilight co-star Robert Pattinson until 2013, told Stern during her interview that she “wanted to” marry him as well.

“I’m not a super duper traditionalist, but at the same time…every relationship I’ve ever been in, I thought that was it. I’ve never really been the most casual person,” she explained.