Harry Styles advises exes who attended his concert together 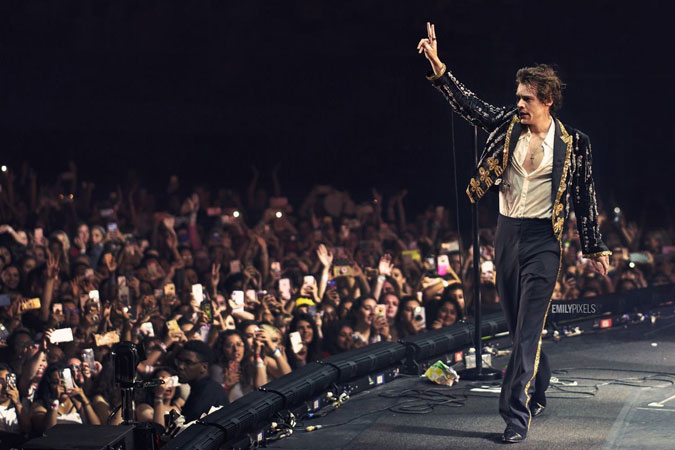 Harry Styles may know a thing or two about sugar, but he also has words of wisdom when things are, well, not so sweet.

Harry’s Love On Tour concert series has been making waves with every stop, but it was his Harryween show in NYC on Oct. 31 that truly raised the bar.

After reading a fan’s sign aloud that read, “I came with my ex for you,” the singer said, “I have questions. First of all, why is that for me? I think it might be for you,” adding with a laugh, “It’s OK!” Harry also gained a little intel on the former couple when the woman revealed that they’d broken up just two weeks prior, after dating for seven months.

“You know…It’s very nice that you guys are here together,” he continued. “It’s very mature. It’s very nice that you can enjoy an evening out, you know, as friends. Seven months ago, seven months and two weeks ago, there was a time when you thought, ‘We like each other a lot.'” “I don’t know where your relationship is at now. It’s clearly better than some people,” Harry jokingly added. “But for tonight, just for tonight, let’s take it back all the way.”

However, when the audience erupted in major applause for the idea of going back in time, the “Adore You” singer made things crystal clear.

“I don’t mean she has to go back out with you,” he clarified. “She can do whatever she wants. My point is, let’s reminisce on a night seven months and two weeks ago when you two looked at each other, deep in the eyes, and you thought, ‘Yeah, you’ll do.'”

After wishing the fans “all the best” in their future endeavours, “both separately and together,” Harry also turned back to something that was, well-very unexpected.

Focusing his attention back on the couple, he began, “Are you OK also, sir, I didn’t ask-oh, they’re kissing!” After spotting them embracing, his concern continued.

A Harry Styles concert may just be the thing to help exes get back on good grounds-one show at a time.