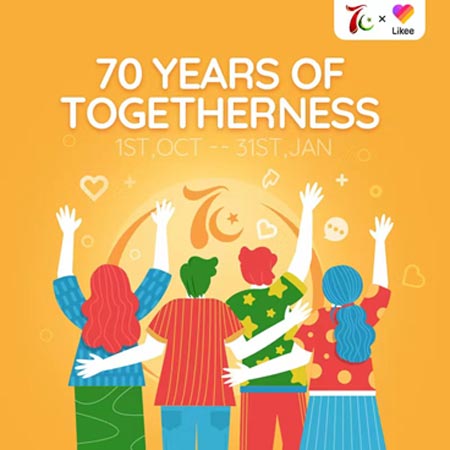 The Chinese Embassy in Pakistan Tuesday has launched a short video creation contest to mark the 70th anniversary of establishment of diplomatic relations between China and Pakistan.

The contest tilted ‘My Story with China’ was arranged in collaboration with a short video sharing platform “Likee”, said a news release. The contest, spanning over a period of four months, was divided into two stages: monthly competition and the final.

In the first three months, the theme of the contest will be released on the first of each month. The final is scheduled to be held in Spring Festival 2022.

The winners will be awarded with a cash prize amounting to Rs2 million in total, which will be given by the Chinese companies. The selection is based on evaluation of short video quality and audience affection. Since the launch of the event with the first theme of #MyStoryWithChina in October, it has struck a responsive chord in the hearts of the Pakistani people and attracted the attention of numerous participants.

For the first month, the total exposure of the contest is more than 48 million, with 4,217 participating short videos getting more than 33 million views and 1.85 million likes.

Behind every short video, there is a good story on China-Pakistan friendship.

Sana, a student who received a scholarship from the North University of China and had a studying experience of three years in China, is one of them.

Sana said when she learned about this contest, all the beautiful memories she had in China flashed in her mind back immediately. Sana said she saw the first snowfall of her life after arriving at the URUMQI Stop, the impressive and well-equipped dormitory, which was only offered to the Pakistani students, the language courses, and cultural activities.

“China has been one of the strongest friends of Pakistan over the years. As a big fan of Chinese culture and a sincere supporter of China-Pakistan friendship, I feel honored to express my joy and passion towards our friends across the border,” she remarked and shared her intent to participate in the contest along with several other people from the community to deliver a message of the love they had towards the Chinese people.

The embassy said the theme for the month of November would be “My story with CPEC”, and more exciting stories are expected to come.