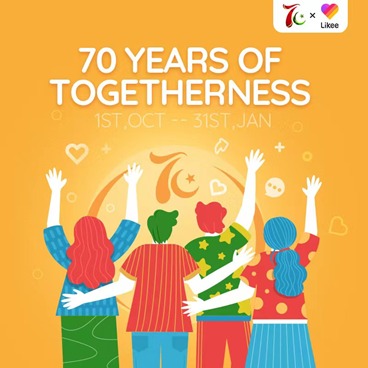 The year 2021 marks 70th anniversary of the establishment of diplomatic relations between China and Pakistan. As a special arrangement of the series celebration activities, Chinese Embassy in cooperation with the short video sharing platform Likee, initiated a short video creation contest “My story with China”, and try to portrait the bilateral friendship it in a new way.

The contest covers a period of 4 months, divided into two stages: monthly competition and the final. The first 3 months are monthly competitions. The theme is released on the 1st of each month. The final is scheduled to be held in the Spring Festival of 2022. The contest will award winners with cash amounts to PKR 2 million in total, and rich prizes contributed by Chinese companies. The selection is based on the evaluation of short video quality and audience affection.

Since the launching of this event with the first theme of #MyStoryWithChina in October, it has struck a responsive chord in the hearts of the Pakistani people and attracted the attention of numerous participants. For the first month, the total exposure of the contest is more than 48 million, with 4217 participating short videos getting more than 33 million views and 1.85 million likes.

Behind every short video there is a good story on China-Pakistan friendship. Sana, a student who received a scholarship from North University of China and had a studying experience of three years in China, is one of them.

The first time when Sana learned about this contest, all the beautiful memories she had in China flashed in her mind immediately. The moment she saw the first snowfall of her life when arriving at the URUMQI Stop, the impressive and well-equipped dormitory which is only offered for the Pakistani students, the language courses and culture activities through which she gained a deeper understanding about China-Pakistan friendship, and the major training as well as the internship program providing her with professional skills, all are unforgettable stories she wants to share with Pakistani people all the time. “Isn’t this short video creation contest the best opportunity for me to share my stories with China?” As soon as this idea popped up, she can’t help to create videos telling her story with China and upload it on Likee app to participate in the contest.

Further adding her enthusiasm towards the newly launched initiative, Sana noted; “China has been one of the strongest friends of Pakistan over the years. As a big fan of Chinese culture and sincere supporter of China-Pakistan friendship, I feel honored to express my joy and passion towards our friends across the border. I will be actively participating in the contest along with several other people from the community to deliver a message of the love we feel towards the Chinese people. I look forward to more such events in the future.”

By exploring more innovative activities, Chinese Embassy in Pakistan is working hard to inject new impetus and new elements into China-Pakistan friendship, and attract more and more young people to devote themselves to the inter-generational inheritance of China-Pakistan friendship. As the November contest unveils, with the theme of “My story with CPEC”, more exciting stories are expected to come.