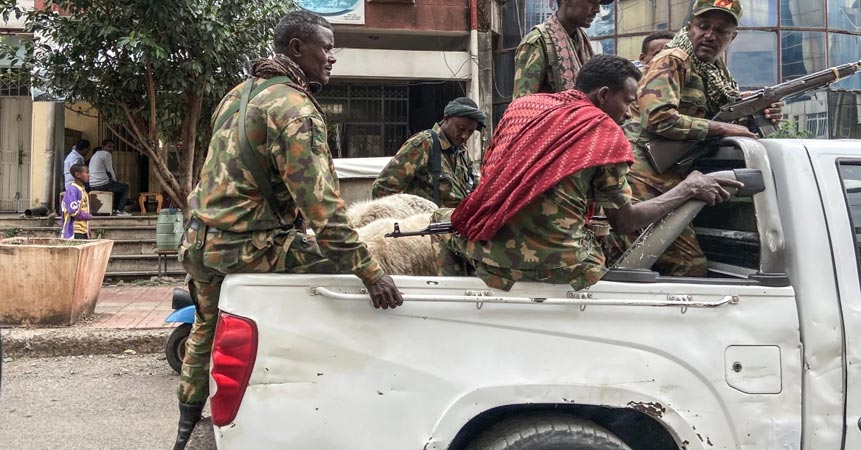 Ethiopian forces and Tigrayan rebels fought a pitched battle for control of Kombolcha on Monday, terrified residents reported, after the rebels claimed to have taken over a second town in two days.

Reports of rebels capturing Kombolcha came a day after they claimed control of Dessie and, if confirmed, would mark a major advance by the Tigray People’s Liberation Front (TPLF) in the nearly year-long war.

Much of northern Ethiopia is under a communications blackout, and access for journalists is restricted, making battlefield claims difficult to verify independently.

Kombolcha residents described non-stop gunfire overnight and into the early hours on Monday, with some saying they heard what sounded like an air strike on the town’s outskirts around midnight.

“The night was filled with many gunshots,” said Mohammed, who like other locals declined to share his last name for safety reasons.

“I heard an air strike past midnight outside Kombolcha borders,” he added.

Hamdiu, a shopkeeper in Kombolcha, told AFP he too heard what sounded like an air strike around midnight.

“Huge gunshots were heard until (this) morning”, he said, as the rebels battled federal troops and local militias.

But a government spokeswoman on Monday told AFP: “There were no air strikes in Kombolcha overnight.”

Over the past two weeks, Ethiopia’s air force has carried out a string of aerial bombardments in Tigray.

Control of the skies, along with superior manpower, is one of the few remaining areas where the government holds a military advantage over the rebels.

Meanwhile the government Monday accused the TPLF of having “summarily executed more than 100 youth residents of Kombolcha”, but provided no details about the killings.

“The international community should not turn (a) blind eye to such atrocities,” it said.

The TPLF did not respond to requests for comment. AFP was unable to reach anyone in Dessie, where heavy fighting was reported on Sunday.

As of September, Amhara authorities estimated that at least 233,000 people fleeing the rebel advance had found refuge in Dessie and Kombolcha.

The conflict has alarmed the international community, with US Secretary of State Antony Blinken calling for an immediate halt to military operations.

Referring to “reports of the TPLF takeover of Dessie and Kombolcha”, Blinken tweeted: “Continued fighting prolongs the dire humanitarian crisis in northern Ethiopia.” The rebels’ offensive in the towns south of Addis Ababa has fuelled speculation that the TPLF was approaching Ethiopia’s capital.

But the rebels’ spokesman Getachew Reda said the TPLF, which dominated national politics for three decades until 2018, had no “other motive than breaking the deadly siege” on Tigray, which is in the throes of a severe humanitarian crisis.

Prime Minister Abiy Ahmed has urged Ethiopians to use “any type of weapons… to block the destructive TPLF, to overturn it and bury it”.

The Amhara administration Sunday ordered all government institutions to suspend regular services and divert their budgets to “the survival campaign”.

Elsewhere in Amhara, rebels from the Oromo Liberation Army — who are allied with the TPLF — announced Sunday that they had captured the town of Kemissie, south of Kombolcha and located on a major highway to Addis Ababa.

The conflict erupted last November when Abiy deployed troops in Tigray, with the operation spiralling into a prolonged war marked by massacres, mass rapes and a humanitarian crisis.

The conflict has pushed an estimated 400,000 people to the brink of famine, with Tigray under a de facto aid blockade, according to the UN.

Abiy, who won the Nobel Peace Prize in 2019, said the operation was in response to attacks on army camps by the TPLF.

He vowed a swift victory, but by late June the rebels had regrouped and retaken most of Tigray, including the capital Mekele, and fighting spread to the neighbouring regions of Amhara and Afar.