‘Doctor G’ to release next year 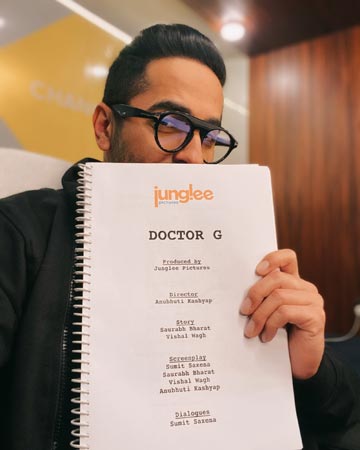 The much anticipated movie ‘Doctor G’ starring Ayushmann Khurrana, Rakul Preet Singh and Shefali Shah is all set to release in theatres on June 17, 2022.

It will be interesting to see Ayushmann portraying the role of a gynaecologist for the first time in the campus comedy drama, alongside Rakul and veteran actor Shefali Shah.

After two successful collaborations ‘Bareilly Ki Barfi’ and ‘Badhaai Ho’, both Ayushmann and Junglee Pictures have collaborated yet again to score a hat-trick at the box office.

Amrita Pandey of Junglee Pictures says, “The writers of the film – Sumit, Saurabh and Vishal along with Anubhuti have created a fabulous script of ‘Doctor G’ which Anubhuti has taken to the next level. We can’t wait to bring it to the theatres on June 17 next year.”

Anubhuti Kashyap, who is making her feature directorial debut with the movie adds, “With the shoot of the movie wrapped up, we are now gearing up to get the movie ready for theatres. I am really happy to have got the opportunity to work with Ayushmann, Rakul, Shefali, Junglee and the entire team of ‘Doctor G’ who stood by me and that reflects on screen. It has been an enriching experience. I am really excited to bring the movie to audiences. Directed by Anubhuti Kashyap, ‘Doctor G’ is a campus comedy drama, co-written by her, Sumit Saxena, Vishal Wagh and Saurabh Bharat. Starring Ayushmann Khurrana, Rakul Preet Singh and Shefali Shah among others, ‘Doctor G’ is scheduled to release on June 17, 2022.