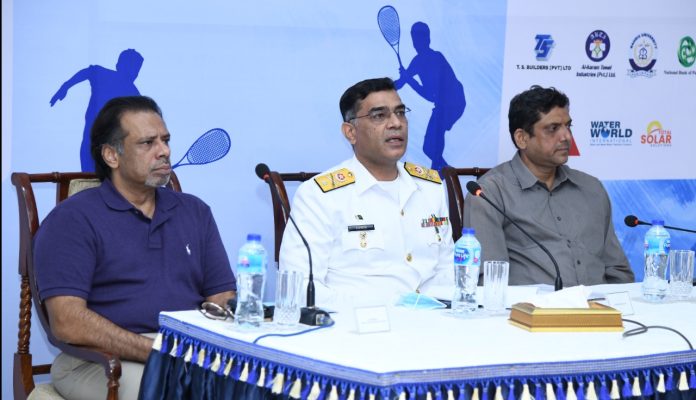 He said that foreign players are coming from 4 different countries including Egypt, Hong Kong, USA, and Kuwait. The First edition of the Chief of Naval Staff Squash Championship was played in the year 2000 with a prize money of US$ 6000. This prize money was increased with the passage of time with an aim to promote the game and to bring the best world players to this court.

This year an amount of US$ 20000 has been earmarked as prize money for the championship. Pakistan Navy has an old and deep-rooted association with the game of Squash. This association of PN with Squash dates back to the independence of Pakistan. Initially, squash was started at a single court at Manora. The game was promoted with the passage of time and best infrastructure was constructed by Pakistan Navy to offer facilities of international standard to both, veteran as well as new players of squash.

It was inaugurated by Admiral Y H Malik on 19 June 1991. This purpose built complex comprises five courts of international standard. Moreover, a modern 4 sided glass court is under construction, which once completed, will add will be to the magnificence of this complex.

Cdre Kamran Ahmed said that gathering international players at one platform through 15th CNS Squash championship will project soft image of Pakistan to the world and will show the world that Pakistan is a safe and secure country for players from across the world to come and play here.

The tournament director acknowledged the generous contribution of valued sponsors for standing with Pakistan Navy for the promotion of sports. He also admired the support of Pakistan Squash Federation and Sindh Squash Association for the tournament.