Imran Khan, your time is up: Shehbaz 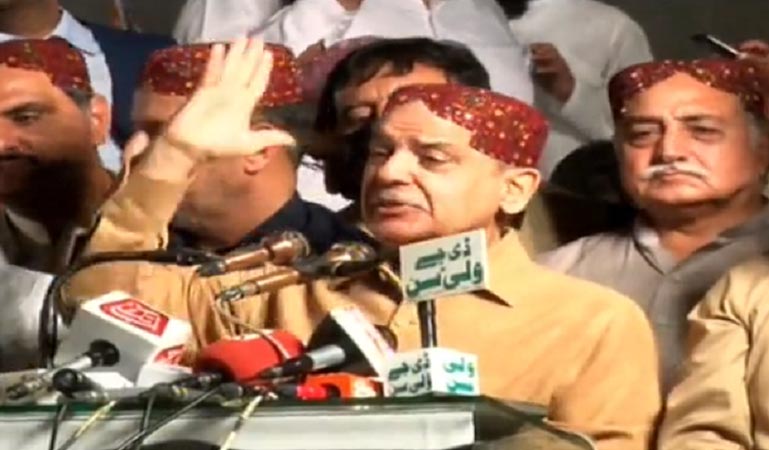 Pakistan Muslim League-Nawaz (PML-N) President Shehbaz Sharif on Sunday once again came down hard at Prime Minister Imran Khan-led government over rising inflation in the country, saying that “sea of people is ready to overthrow his government”, a private TV channel reported.

Addressing a rally at DG Khan on Sunday, the PML-N president said that the fact that people turned up in large numbers for the PDM rally testified that it was time for the Imran Khan government to go home. He said people needed to get rid of the government if they wanted to overcome inflation. “Petrol and electricity [prices] are falling on people like bombs. People must take to the streets now,” he said, adding that sugar, flour, ghee, and medicine prices were going up under the Khan government and would further increase if he were allowed to continue.

“The sea of people is a testament that your [PM Imran] time is up … you have made the lives of masses miserable with the back-breaking inflation and rising poverty,” Shehbaz said.

The anti-government rally was organised under the umbrella of the Pakistan Democratic Movement (PDM), a joint opposition alliance.

Shehbaz, while comparing the last PML-N’s tenure with the incumbent government, said former prime minister Nawaz Sharif built a number of public welfare projects in South Punjab. “We built Danish schools across South Punjab under the leadership of Nawaz Sharif.”

Shehbaz – who is also the Opposition Leader in National Assembly – said that hospitals and universities were also built in various districts of the southern region of the province. He said during the three-year tenure of the PTI government not a single project has been established in South Punjab. he said prices of essential commodities have increased manifold and the poor are unable to afford one square meal a day.

Quoting the Transparency International report, Shehbaz said that corruption has increased in the country during the tenure of the PTI government. He said PM Imran would label former rulers as “thieves” when prices of petrol and other commodities were increased. “But now petrol and electricity bombs are being dropped on people frequently…”

Shehbaz, while rejecting the government’s claims that the economy of the country is progressing, said that the rate of inflation is highest in Pakistan compared to the other countries in the region. “The PTI government has handed over Pakistan to the IMF,” he further said. “This night is not long… stand up and under the leadership of Maulana Fazlur Rehman [PDM chief] take to the streets against inflation and remove the incumbent government,” Shehbaz added. The PDM held the rally at Railways Road in Dera Ghazi Khan, the hometown of Punjab Chief Minister Usman Buzadar, who reacted anxiously to the development. PDM Chief Maulana Fazlur Rehman and PMLN President Shehbaz Sharif arrived at the venue Sunday evening. Maryam Nawaz Sharif did not attend the event, allowing critics to underscore the alleged rift in the PMLN.

Punjab Government Spokesperson Hassan Khawar said that uncle Shehbaz Sharif and niece Maryam were never united and neither will be in future.

The preparations for the rally were in full swing since Sunday morning. Organizers hoisted banners, flags of various PDM constituents and placards on major roads in the city. PML-N’s Marriyum Aurangzeb claimed that the public gathering would prove to be a referendum against “the cruel government.” When asked about the possibility of bringing PPP back into the PDM fold, Rana Sanaullah said that they did not have time for appeasing anyone, adding that it was the right time to get rid of the government. The rally brings the political battle to home turf for Punjab Chief Minister Usman Buzdar who hails from DG Khan.

On Sunday he said public gatherings and protests would not put the country on the path to progress. “There is no room for anarchy in the country and this is not the time for demonstrating negative politics.”

In a message to PDM leaders, Buzdar said that he expected the opposition, especially PDM, to act in a responsible manner. “Pakistan’s vital interests must be held above everything else,” Buzdar maintained.