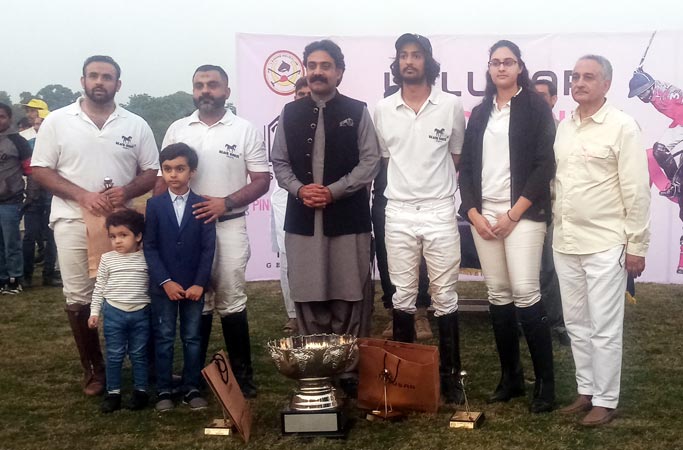 LAHORE: Black Horse Paints won Lulusar Polo in Pink trophy after outpacing Guard Group by 11½-5 in the main final played at the Lahore Polo Club Ground here on Sunday. Hamza Mawaz Khan was the hero of the main final as he exhibited superb horse and stick work and converted exceptional eight goals from the victorious side while Leenah Bari and Abubakar Siddique slammed in one goal each. From the losing team, Saqib Khan Khakwani played superb polo and thrashed in three goals while Taimur Ali Malik struck the remaining two goals. Talking to the media, Abubakar Siddique of Black Horse Paints said: “It was teamwork which helped us give tough times to our opponents throughout the event and in the end, we succeeded in lifting the coveted trophy. It was really a good day for us and the title victory made our day more memorable. We are now focused on playing better polo in the coming events and will try to win more titles.”

Earlier in the subsidiary final, Zacky Farms played well against ZS Polo and registered an impressive 6½-3 win against their opponents. From the team Zacky Farms, Shah Qubilai Alam hammered a hat-trick of goals while his teammates Chaudhry Hayat Noon and Nazar Dean scored two and one goal respectively. From team ZS Polo, Farasat Ali Chatha banged in a brace and Lt Col Umar Minhas struck one goal. Before the main final, different programmes were arranged by Lahore Polo Club, Polo in Pink and Lulusar in order to amuse spectators and polo lovers. The programmes include tent-pegging, horse archery, quadrum band, bikers and vintage cars show. The people, who were present on the occasion, really enjoyed these programmes and thanked the Lahore Polo Club and all the sponsors for arranging such heart-warming events.