* The film made many of us believe in the concept of love, friendship and how sometimes both the relationships requires us to make sacrifices 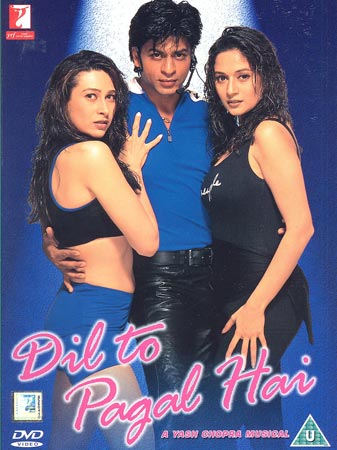 “Kahin na kahin, koi na koi mere liye banaya gaya hai…” In the times of Bumble and Tinder where falling in love is as simple as swiping right, that idea about soulmates may seem dated and well, cheesy. However, 24 years ago, it had people flocking to the theatres and cemented the position of Shah Rukh Khan as king of romance.

The Yash Chopra directorial Dil Toh Pagal Hai began with a charming SRK and a gorgeous Madhuri Dixit talking about their belief in soulmates.

They introduce us to the theme of the film, and how it is all predestined. This is where you decide whether you are invested in it or not because the rest of the film sells the idea hard – packaged with hummable music, soft focus frames and beautiful people dressed in beautiful clothes.

The film made many of us believe in the concept of love, friendship and how sometimes both the relationships requires us to make sacrifices. Shah Rukh Khan was India’s favourite loverboy then and whether as Rahul or Raj, we were ready to buy into that ideal of romance. But today, in 2021, can we still believe in the idea of soulmates? While I have watched the film several times before, I re-watched it recently only to realise how my perspective on it has changed. Instead of looking at it from the perspective of Madhuri Dixit’s perspective, I decided to step into the shoes of Nisha

Nisha was hopelessly in love with Rahul. She is friendzoned but that didn’t affect her affection for him. ‘Jispe hum marr mite, usko pata bhi nahi,’ Karisma sings for Rahul as he is busy celebrating Valentine’s Day. For me, Dil Toh Pagal Hai emerged as a much better film dealing with friendzoned, one-sided love, unlike Ae Dil Hai Mushkil, which left me cringing.

Nisha is obsessive but she lets go of Rahul eventually as she understands that he loves someone else. There’s a respect in the bond the two share. There is an understanding of other’s emotions.

There is pain too. You feel for Nisha but there is nothing cringe about it. Akshay Kumar’s Ajay might have been a cameo appearance but he also depicts one-sided love, which is free of any negative feelings, even jealousy that we see in Nisha. Kudos to Yash Chopra for portraying Nisha’s jealousy in such a creative manner with The Dance of Envy. That sequence is still one of the epic face-offs of Bollywood.

In the making video of Dil Toh Pagal Hai, the veteran late director calls the film a “a film of feel,” and even after 24 years later, we cannot agree any less with him. Karisma was wary of doing the film and had decided to reject it like many before her. Juhi Chawla, Kajol, Manisha Koirala and Urmila Matondkar had reportedly said no to the film before it came to Karisma. “Every single heroine refused the film. The role came to me…it was a dance film and that too to work with opposite Madhuri Dixit. Everyone said, ‘No how can we dance alongside Madhuri Dixit ji.’ Initially, I too said no to it as it was a dance film and competition dance with Madhuri Dixit. I said, ‘This isn’t happening’,” she said years later.

However, it was mother Babita who encouraged her to do the film. “Yash ji and Adi narrated the story to me. My mother told me, ‘You must take up the challenge. You are a big fan of Madhuri Dixit, you must do it. You work hard and you will shine’,” she said. The actor went on to win Filmfare award for Best Supporting Actress for the film.

If you want to celebrate the film’s journey by watching it, the film is streaming on Amazon Prime Video.