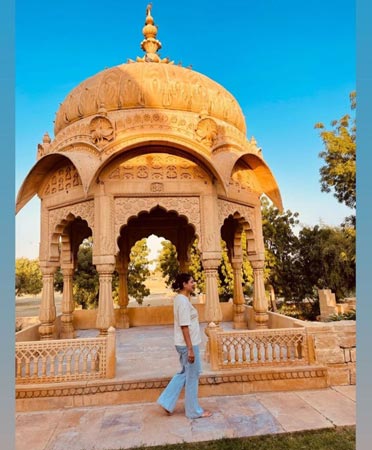 Kareena Kapoor Khan is currently in Rajasthan and the actor is making sure to spend quality time with her family.

On Saturday, Kareena treated her fans to a stunning photo of herself in which she was seen strolling around the resort she is staying in. She also shared a picture of Taimur and tagged him as “the love of my life.”

Kareena flew to Rajasthan earlier this week with Saif Ali Khan and her kids. This is the family’s second trip in the last two months. Earlier in September, Kareena celebrated her birthday with her family in the Maldives.

On the work front, Kareena will be seen in Laal Singh Chaddha. She also released a book titled Kareena Kapoor Khan’s Pregnancy Bible in which she opened up on her first and second pregnancy.

In an interview with The Guardian, the actor said she wanted to ‘own’ pregnancy phase completely. “Most Bollywood actors, when they get pregnant, don’t leave the house because they are stressed about how they look, that they are no longer this glamorous diva, worried if they put on some weight that people will judge them. There’s still a lot of those taboos. But I just wanted to own it,” the actor said.

She also spoke about the trolling the couple faced for naming their sons Jehangir and Taimur. Explaining her stance on the controversial subject, Kareena Kapoor said, “Honestly, these are names that we just liked; it’s nothing else. They are beautiful names and they’re beautiful boys. It’s unfathomable why somebody would troll children. I feel terrible about it, but I have to just focus and get through it. I can’t be looking at my life through the trolls.” Meanwhile, Kareena is also venturing into production. She will be co-producing Hansal Mehta’s upcoming film.