Truce or not? UK and France at odds after crunch talks 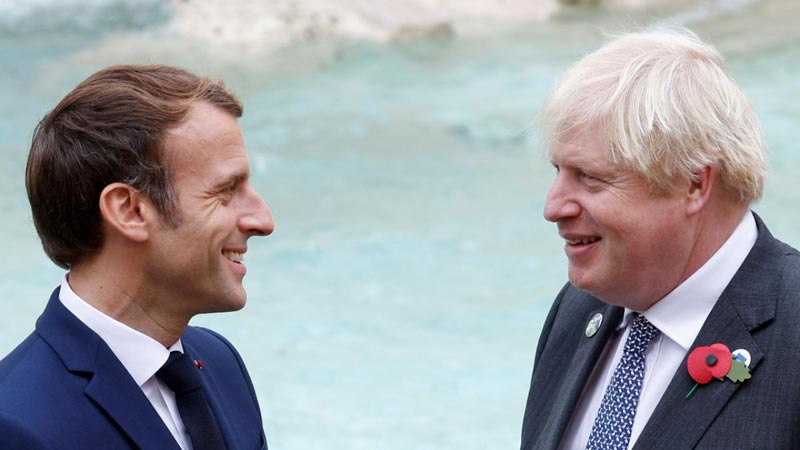 France and Britain offered wildly differing accounts after their leaders met Sunday to resolve a row over post-Brexit fishing rights that threatens to turn into a full-blown trade war.

President Emmanuel Macron’s office was optimistic after the French leader met Prime Minister Boris Johnson one-on-one, without aides, for about half an hour on the margins of the G20 summit in Rome.

The leaders agreed to work on “practical and operational measures” to resolve the dispute in the coming days, the office said.

They were united on the need for a “de-escalation” with concrete action “as soon as possible” it added, a day after Macron and Johnson gave each other friendly pats on the back at the G20.

But Downing Street denied any such agreement, and insisted it was up to Paris to back down on a threat to trigger trade reprisals against British fishing catches and other goods from Tuesday.

As the leaders met, the threat of “proportionate and reversible measures” against Britain was reaffirmed on Twitter Sunday by French Europe minister Clement Beaune.

“If the French government want to come forward with proposals to de-escalate the threats they have made, we would absolutely welcome them,” Johnson’s spokesman told reporters in Rome.

“Our position has not changed,” he said.

France is incensed that Britain and the Channel Islands of Jersey and Guernsey have not issued some French boats licences to fish in their waters since Brexit took full effect at the start of 2021.

The dispute has taken time out of both leaders’ packed schedules when they are both working hard on the climate change agenda heading into the UN’s COP26 meeting in Glasgow.

Johnson will host more than 120 leaders at a COP26 summit on Monday and Tuesday, and has repeatedly said that Britain, France and the EU as a whole need to stay focused on the existential threat.

“France is a longstanding ally. It was an open meeting. They had a lot to discuss,” Johnson’s spokesman said.

But he stressed the UK would continue to process applications by French and other EU fishing vessels to ply its waters based solely on technical data.

“We stand ready to work with the French government and individual fishermen if they have the requisite data. There’s no further work to be done.”

Johnson’s own focus in the Macron meeting was on persuading the EU to amend a post-Brexit protocol governing trade between Great Britain and Northern Ireland, the spokesman added.

On Saturday in Rome, Johnson complained to von der Leyen that the French threats were “completely unjustified”.

London is warning it could activate a Brexit dispute tool for the first time, exposing all of the EU to potential UK trade measures, if France executes its threatened actions on Tuesday.

Paris had vowed that unless more licences are approved, it would ban UK boats from unloading their catches at French ports, and even impose checks on all products brought to France from Britain.

For his part, Macron warned Friday that Britain’s “credibility” was on the line, accusing London of ignoring the Brexit trade deal agreed with Brussels after years of tortuous negotiations.

“When you spend years negotiating a treaty and then a few months later you do the opposite of what was decided on the aspects that suit you the least, it is not a big sign of your credibility,” he told the Financial Times.