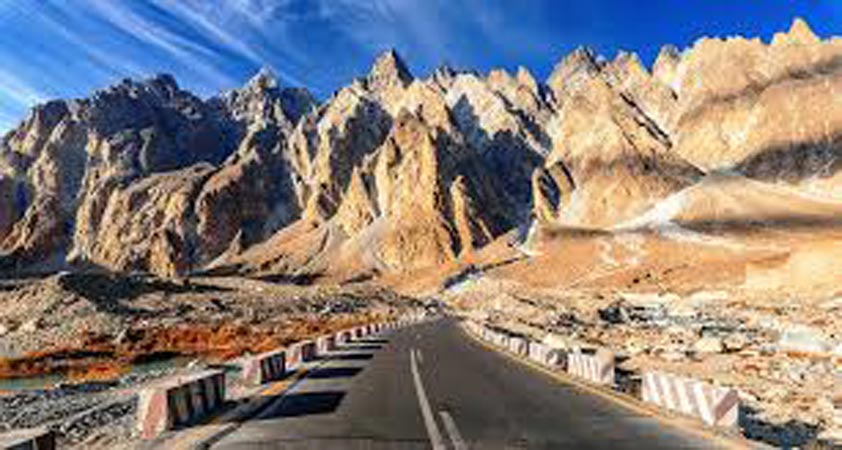 The Karakoram Highway romanized: Karakoram; known by its initials KKH, also known as N-35 or National Highway 35 or the China-Pakistan Friendship Highway) is a 1,300 km (810 mi) national highway which extends from Hasan Abdal in the Punjab province of Pakistan to the Khunjerab Pass in Gilgit-Baltistan, where it crosses into China and becomes China National Highway 314. The highway connects the Pakistani provinces of Punjab and Khyber Pakhtunkhwa plus Gilgit-Baltistan with China’s Xinjiang Uyghur Autonomous Region. The highway is a popular tourist attraction and is one of the highest paved roads in the world, passing through the Karakoram mountain range, at maximum elevation of 4,714 m (15,466 ft) near Khunjerab Pass.[1][2][3] Due to its high elevation and the difficult conditions in which it was constructed, it is often referred to as the Eighth Wonder of the World.[4][5][6] The highway is also a part of the Asian Highway AH4.The Karakoram Highway, also known as the Friendship Highway in China, was built by the governments of Pakistan and China. It was started in 1959 and was completed and opened to the public in 1979. Pakistan initially favored routing through Mintaka Pass. In 1966, China, citing the fact that Mintaka would be more susceptible to air strikes, recommended the steeper Khunjerab Pass instead.[7] About 810 Pakistanis and about 200 Chinese workers lost their lives,[8] mostly in landslides and falls, while building the highway. Over 140 Chinese workers who died during the construction are buried in the Chinese cemetery in Gilgit.[9] The route of the KKH traces one of the many paths of the ancient Silk Road.

On the Pakistani side, the road was constructed by FWO (Frontier Works Organisation), employing the Pakistan Army Corps of Engineers. The Engineer-in-Chief’s Branch of the Pakistani Army completed a project documenting the history of the highway. The book History of Karakoram Highway was written by Brigadier (Retired) Muhammad Mumtaz Khalid in two volumes. In the first volume, the author discusses the land and the people, the pre-historic communication system in the Northern Areas, the need for an all-weather road link with Gilgit, and the construction of Indus Valley Road. The second volume records events leading to the conversion of the Indus Valley Road to the Karakoram Highway, the difficulties in its construction, and the role of the Pakistan Army Corps of Engineers and their Chinese counterparts in its construction.