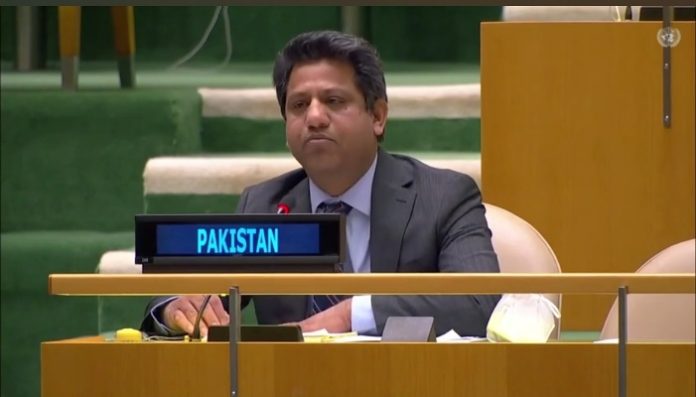 UNITED NATIONS: Pakistan has called on the United Nations Human Rights Council to pay “much closer attention” to the situations in UN-recognized disputed territories and those under foreign occupation, and take “decisive action” to address rights violations there.

Speaking in the General Assembly on Friday, Ambassador Aamir Khan, the acting permanent representative of Pakistan to the UN, also called on the international community to play its role in halting a rising tide of Islamophobia and attacks on minorities.

The Pakistan envoy, who was participating in a debate on the annual report of the 47-member Geneva-based Council, said it should consider human rights situations with objectivity and without selectivity. “The human rights situations in UN-recognized disputed territories and territories under foreign occupation warrant much closer attention by the Council,” he said — obviously referring to Kashmir and Palestine.

“It is in the very nature of such situations that human rights are more likely to be violated there. It also allows occupying powers to enact draconian laws in the occupied territories to provide their security forces the impunity for violations of human rights as a means of avoiding international scrutiny and enabling the foreign occupations.”

IN his remarks, Aamir Khan warned that Islamophobia has been mainstreamed in the political discourse of some governments and political parties that call for expulsion of Muslims, politicization, and censorship of the hijab, burning of the Holy Quran, vandalizing of Islamic symbols and holy sites, while also inciting and provoking, in the name of free speech, through hurtful caricatures and competitions.

Pakistan, he said, strongly condemns the vandalization of several mosques, houses, and shops of Muslims in “our neighborhood” (India) a few days ago, adding that these senseless attacks are continuing since last week. “The state machinery has reportedly not only failed to protect Muslims and their properties but remained non-responsive to desperate calls for help by the local Muslim organizations,” the Pakistani envoy said.

Welcoming the 193-member General Assembly’s recognition of Islamophobia as a contemporary manifestation of racism, Aamir Khan pointed out that a recent UN report noted that “institutional suspicion and fear of Muslims and those perceived to be Muslim has escalated to epidemic proportions” in the aftermath of 9/11 terrorist attacks.

Unfortunately, he said, during the last two decades terrorism has been associated with Islam by some quarters, increasing the tendency of right-wing, xenophobic, and violent nationalists, extremists, and terrorist groups to target Muslims. “These extremist and terrorist groups should be brought under the ambit of the UN’s counter-terrorism architecture, including in the Security Council,” the Pakistani envoy said.

In conclusion, he reaffirmed Pakistan’s abiding commitment to the promotion and protection of human rights and fundamental freedoms at the national and international levels. Presenting the annual report, Human Rights Council President Nazhat Shameem Khan, a Fijian diplomat of Pakistani origin, said that the Council’s diverse membership is among its greatest strengths at a time when global crises require a deep commitment of all States. “We have a collective moral duty to speak out for those who cannot speak, to champion their causes and to work towards the protection and promotion of human rights, everywhere,” she said.