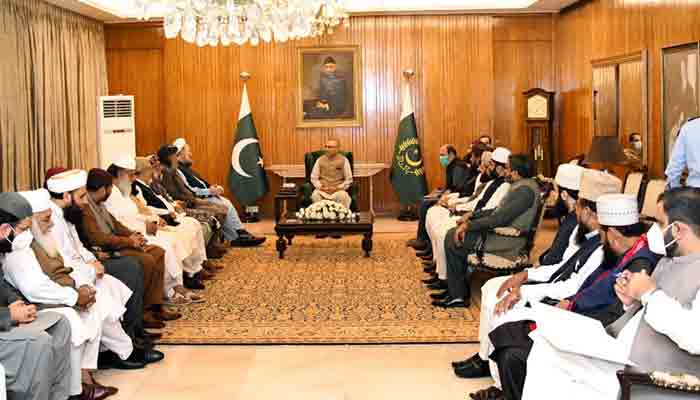 ISLAMABAD: President Dr Arif Alvi Friday sought Ulema’s help in diffusing the ongoing tense situation in the country due to the protests by proscribed Tehreek-i-Labbaik Pakistan (TLP) that has disrupted life in several Punjab cities.

The president made these remarks in a consultative meeting with a delegation of Ulema of Ahle-e-Sunnat Wal Jamaat from different districts across the country led by Federal Minister for Religious Affairs Noor-ul Haq-Qadri, here at the Aiwan-e-Sadr.

The consultative meeting at the President House had taken place after a National Security Committee huddle in Islamabad unanimously resolved to guard the sovereignty of the state from all internal and external threats and to not allow the proscribed outfit to challenge its writ in any way.

Speaking to the religious leaders, President Alvi said Ulema have always played a significant role in providing moral and religious guidance to people besides standing with the state in difficult times.

The meeting deliberated upon various options to address the current situation peacefully and emphasised on resolving the matter through negotiations.

He said the present government raised the voice against Islamophobia and for the sanctity of Prophet Muhammad (Peace Be Upon Him) at all international fora and effectively advocated the stance of Muslims.

He mentioned that the government also set up the Rehmatul-Lil-Alameen Authority, which would promote the glowing teachings of the Holy Prophet (PBUH) and guide the nation to follow His footsteps for success in this life and hereafter.

Dr Alvi said Islam is a religion of peace and urges mankind to practice brotherhood and tolerance. It also stresses upon protecting the lives and property of each other and discourages acts of violence, he added.

During the meeting, Ulema expressed concern over the reports of violence causing harm to the lives and property of the general public.

They stressed that violence would negatively impact the image of the country as well as the religion of Islam and offered their support and services to resolve the situation peacefully and in an amicable way.

‘No more breach of law by TLP to be tolerated’

On Friday, the National Security Committee received a detailed briefing on the country’s internal security situation and the ongoing agitation by the proscribed TLP.

Speaking on the occasion, Prime Minister Imran Khan had stressed that no group or entity will be allowed to cause public disruption or use violence to pressure the government.

Taking serious note of the unprovoked violent attacks committed by TLP members, the NSC had resolved not to tolerate any further breach of law by this proscribed group.

Endorsing the view of the committee, the prime minister had instructed that all measures and actions necessary to enforce the law and protect the interests of the state and public shall be ensured.

The NSC had praised the police for their professionalism and restraint despite being directly targeted and suffering casualties, including four martyrs and over four hundred injured.

However, it warned that the state’s restraint should not be seen as a sign of weakness.

While emphasizing that the government recognises the right of peaceful protest of all Pakistanis, the committee members were unanimous that the proscribed outfit is deliberately employing violence against public property, state officials, and ordinary citizens to create instability in the country and that this shall not be tolerated.

The NSC had said all organs of the state stand ready to act as per the law to protect the life and property of citizens.