* Alia Zafar said that the yearly festivals connect us as readers 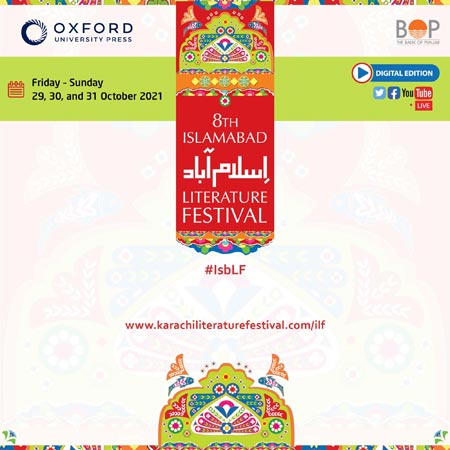 The inaugural session of the three-day Islamabad Literature Festival (IsbLF-2021) was held digitally on Friday.

During his Welcome Speech, Mr. Arshad Saeed Husain, Managing Director, Oxford University Press, Pakistan (OUP) said that an online environment provides a chance for people across the world to engage in a meaningful conversation. He further said that the IsbLF-2021 promotes an exchange between writers, intellectuals, and artists within Pakistan and across borders, cultures, and languages.

He said we must anticipate the times we are heading to and that the future will be different than our past. We would require all our creativity to reimagining the future, which is also the theme of IsbLF-2021.

Alia Zafar, Group Head People and Organizational Excellence, The Bank of Punjab said that the yearly festivals connect us as readers.

We come across writers and connect with those having a deep love for literature. The writers share their stories while books touch the hearts of readers of all ages and backgrounds.

Raymond Castillo, Minister Counselor for Public Affairs, US Mission, Islamabad said that the Embassy’s goal is to connect people of both countries while engaging and fostering diversity. He added that the Islamabad Literature Festival focuses on issues not only important for the people of Pakistan but across the world at large.

Mark Crossey, Deputy Country Director, British Council Pakistan shared that books of leading Pakistani authors are available in bookstores in the UK. He added that Elizabeth-Jane Burnett and Tahmima Anam, authors from the UK, will be participating in the IsbLF-2021.

He touched upon the theme of IsbLF-2021and said that we need to reimagine the cultural and literary themes.

He informed that the British Council will collaborate with the Government of Pakistan to hold a season to celebrate arts and culture in 2022. It will highlight the culture and history of the UK and Pakistan and the vision for the future.

This will celebrate Pakistan’s 75th Independence and the historic ties between the two countries.

The Keynote Speeches at IsbLF-2021were delivered by Mr. Hameed Shahid (TI), Urdu Fiction Writer and Critic, and Dr Maleeha Lodhi, Former Ambassador at the UN and the US and UK. Mr. Hameed Shahid said that the gadgets have turned humans into products ruled by the capitalist mindset. Events such as the IsbLF bring together people to discuss ideas and insights.

He appreciated the efforts made by the management of IsbLF-2021and OUP Pakistan to host such events to assemble people having a close association with culture and literature. Dr. Maleeha Lodhi spoke about the phenomenon of fake news. She said we are living in a great paradox where globalization is connecting but also fragmenting us. She added that technology information and the digital revolution have parted people in unprecedented ways. There is a dark side as technology and the digital deluge have evolved the spread of false news. She accentuated that disinformation competes with information, thereby challenging us to find the thin line to differentiate between the two.

Deliberate fake news is used for political agenda so frequently that we are now known to be living in the post-truth era. Such information alters human emotions as the criteria for accrediting news is contested, she said. During the three-day IsbLF-2021, the event will host an Urdu Mushaira, sessions on Urdu prose and poetry along with panel discussions on literature, society, culture, education among others. Book launches and book discussions will also be held.