* The 2021 film, which takes off from where the 2018 film ended, is a desperate attempt to latch on to anything and everything 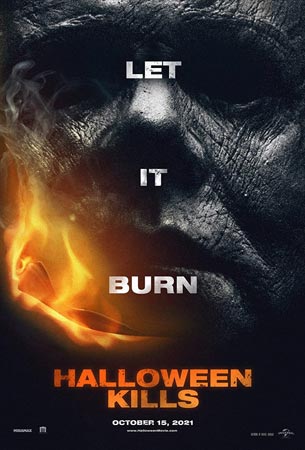 The reason the last film in this slasher film franchise, that began in 1978 and has been made in some form or the other a dozen times, worked was Jamie Lee Curtis.

The actor who made her debut with the first Halloween movie came back to single-handedly retrieve the bloody mess it had been reduced to. What also worked for the 2018 film was positing it as a direct sequel to the 1978 one and suggesting that the events of that bloody night 40 years ago had irrevocably tied the victim Laurie and the serial killer Myers together.

The 2021 film, which takes off from where the 2018 film ended, is a desperate attempt to latch on to anything and everything. So desperate that the first half-an-hour or so is lamely spent revisiting the events that happened in the 1978 and 2018 films.

A bunch of forgettable actors try to work up the dread that stalks the town of Haddonfield in Illinois, and end up as clueless fodder for Myers’s unquenchable blood thirst.

Green, who also directed the 2018 version, has an idea that could have retrieved this film too from its general slasher tropes. Of how a town comes together as a mob to hunt Myers down, and the boundaries that might be crossed in the process. However, Haddonfield’s repeated assertion of “Evil Dies Tonight” has no serious thought put into it. Presumably, a man who has walked out of a burning house and killed 11 firefighters just for the heck of it, not to say survived over 40 years, would take more than 20-odd people riding separately and in different directions, armed with little else but good intentions, to bring down.

These vigilantes include Laurie’s granddaughter, who is called in to join the hunt by her boyfriend. He drops by at the hospital where she is nursing Laurie, who has undergone an operation against a stabbing wound left by Myers, to do just that. The only one with good sense again is Curtis, who stays largely out of sight and out of the fight. However, that means you have to live – and die – with the others.