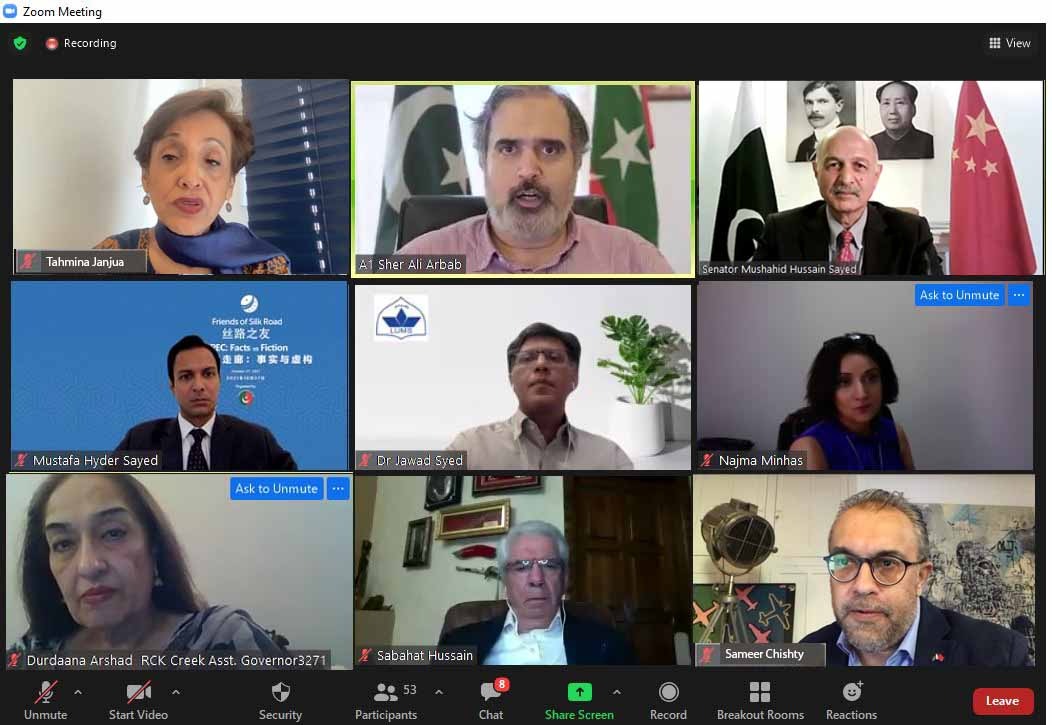 The conference chalked out a comprehensive strategy to debunk the myths being created through disinformation campaigns against CPEC. Moreover, it initiated discourse on the opportunities and challenges that CPEC is facing currently and provided recommendations on dealing with those challenges and utilising the opportunities.

In his keynote speech, Sher Ali Arbab, Chairman Parliamentary Committee on CPEC said that the Parliamentary Committee on CPEC has set up three pillars that act as a blueprint of its functioning i.e it is above party lines, the proceedings of the committee are conducted in-camera for responsible messaging, and the Chairman of the committee acts as its spokesperson. He highlighted the role of parliament in shaping positive public opinion on CPEC through public interaction. While commenting on the pace of CPEC projects, he lauded the work on CPEC Phase One which bridged the infrastructure gap and made energy shortage a relic of the past. He termed CPEC Phase-II a catalyst for industrial overhaul and called for the inclusion of Afghanistan, Iran, and Turkey into CPEC.

Tehmina Janjua, Former Foreign Secretary of Pakistan, recalled the quote of President Xi Jinping during Prime Minister Imran Khan’s visit to China in 2019 i.e “No matter how the international and regional situation changes, the friendship between China and Pakistan will always be unbreakable and rock-solid” and termed this saying a common sentiment shared by the people of Pakistan at all levels. She said that the constancy and its amazing capability to transcend the usual considerations of international politics is the striking feature of the Pakistan-China relationship. For the success of CPEC, we need to expand the beneficiaries of this important project. Potential beneficiaries in the region include Afghanistan, Iran, Central Asian Republics. She also called for a meaningful engagement with the US, including on CPEC, to realize the dream of regional connectivity.

Dr Jawad Sayed, Professor at LUMS, talked about the role that universities can play in shaping public opinion on CPEC and called for interdisciplinary research on CPEC. He called for diversity and integration as the key to the success of projects like CPEC.

Najma Minhas, Managing Editor of the Global Village Space pointed out that the current narrative on CPEC is coming from the US and India, which basically aims to inject disinformation against Chinese involvement in Pakistan through CPEC. She said that “in order to project Pakistan’s narrative on CPEC worldwide, we need to follow a three-pronged strategy.” First, need to highlight the achievements of CPEC phase one which has contributed a lot towards rejuvenating Pakistan’s economy. Secondly, need to highlight that China is a strategic partner of Pakistan and CPEC is just one aspect of the Pakistan-China relationship. Our relationship with China, she said, is deep-rooted in history. Thirdly, we need to consolidate public opinion on CPEC through better inter-departmental coordination. CPEC Authority, she said, is a step in the right direction. She also highlighted the dividends of CPEC being reaped by Balochistan.

Sameer Chishty, Chairman of AsiaPak Investments said that Shenzhen is the most successful special economic zone (SEZ)and Pakistan can learn from the Chinese model in the CPEC SEZs. For that, we need to actively partner with Chinese companies through the establishment of joint ventures (JVs).

Senator Mushahid Hussain Sayed, Chairman Senate Defense Committee & Pakistan-China Institute, in his concluding remarks pointed out that the Pakistan-China relationship is unique, timetested, non-transactional, non tactical and not directed against any country. He termed people-to-people connectivity as the core of this relationship which was recently manifested in a US Pew survey according to which 83% Pakistanis view China as a friend. CPEC Phase 1, he said, has improved infrastructure and alleviated the energy crisis, and revived dead projects like Gwadar Port and Thar Coal. As a result of phase one projects, 75,000 Pakistanis gained employment opportunities. Moreover, he said that the best of CPEC is yet to come through SEZs. He termed yesterday’s phone call with President Xi Jinping as timely which reflected that CPEC is resilient, steadfast and on track. He also lauded President Xi Jinping’s Global Development Initiative as positive for people-centric development. He highlighted Western countries’ copycat approach to the Belt and Road Initiative, which led the US to launch Build Back Better World (B3W), while the EU has similarly launched Global Gateway. He also pointed to the ‘Countering Chinese Influence Fund’ established by the US Senate allocating $300 million for which will be utilised in the media and academia against China. He concluded by saying that there is a need for better media management of CPEC. He also rejected any notion of a New Cold War.

This webinar lasted for 2 hours, with a 45 minute Q & A session. A diverse audience of students, scholars, media and the corporate sector including Chinese companies took an active part in the webinar.