* The best cities have been unveiled as Auckland, Taipei and Germany's Freiburg — with Dublin in seventh — and the best regions as Iceland's Westfjords and West Virginia 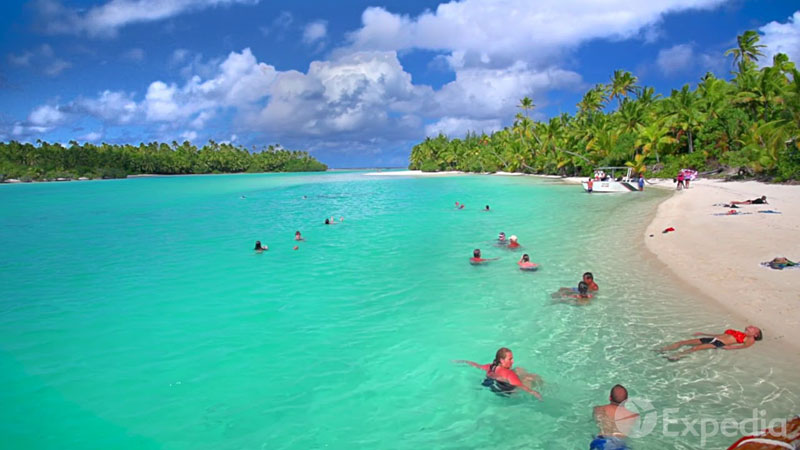 The best places to visit in 2022 have been named by the travel experts at Lonely Planet – and it’s the Cook Islands that’s No1, followed by Norway in second place.

The best cities have been unveiled as Auckland, Taipei and Germany’s Freiburg – with Dublin in seventh – and the best regions as Iceland’s Westfjords, West Virginia, Xishuangbanna in China and Kent’s Downs and Heritage Coast ranking fourth.

Lonely Planet says it awarded the Cook Islands the gold medal ‘thanks to its innovative strategies for pushing forward environmental initiatives in the South Pacific’.

Highlights for visitors include snorkelling and paddleboarding in the Muri Lagoon, caving on ‘Atiu and wandering through Punanga Nui Market on a Saturday morning.

Runner-up Norway is described as a ‘leading light on sustainability, green technology and community culture initiatives, from the cities to the wilderness’.

Lonely Planet recommends holidaymakers ‘take the country’s most spectacular train trip over the snow-strewn Hardangervidda plateau’ on the Bergensbanen rail route and go dog-sledding in Tromso in the Arctic Circle.

Mauritius claims third place on the countries list, followed by Belize and Slovenia, which Lonely Planet says ‘is a world leader in being literally and figuratively “green” with responsible travel being part of the Slovenia way of life for decades’.

The rest of the ranking for countries comprises Anguilla, Oman, Nepal, Malawi and Egypt in tenth place.

CITIES — as for the best cities to visit, Lonely Planet says winner Auckland in New Zealand is ‘recognised for its blossoming cultural scene where the spotlight is on local creativity’.

It adds: ‘Within the city’s boundaries there are 53 volcanoes, more than 50 islands, three wine regions and numerous beaches.’

Need a hand with your Auckland travel itinerary? Lonely Planet recommends exploring Maori and Pasifika artefacts in the Auckland Museum and signing up for a wine-tasting on the Hauraki Gulf islands.

Silver medal winner Taipei is praised for ‘its inclusive approach to society and protection of natural and cultural experiences’ while Freiburg comes third as ‘a trailblazer in Germany’s environmental movement’.

The guidebook, which commends the city’s ‘invigorated arts scene and cutting-edge sustainability initiatives’, recommends tucking into ‘classic homemade Southern cuisine’ in Mary Mac’s Tea Room and paying a visit to the Georgia Aquarium – the largest aquarium in the US.

Seventh place is awarded to Dublin, owing to the city’s ‘approach to ethical tourism, its flourishing independent artisan shopping scene and plans to pedestrianise parts of the centre to create a renewed sense of community’.

The Irish capital’s highlights include the Guinness Storehouse, where punters can savour ‘a pint of plain’, and the historic former prison of Kilmainham Gaol.

The remaining cities in the ranking are Mexico’s Merida, Florence and Gyeongju in South Korea Turning to the best regions ranking, Lonely Planet says Westfjords is a deserving winner as it’s ‘one of the most remote and untouched regions’ in the world, adding that ‘the area is proving increasingly popular with hikers and outdoor adventure enthusiasts’.

Runner-up West Virginia, the guidebook reveals, ‘has long been a nexus of American culture and is finally attracting some well-deserved outside attention’.

It adds: ‘Visitors will discover a still-uncrowded region with unspoiled mountains and unmistakable heritage, where the leisurely tempo of Southern small towns converges with the adrenaline sports that attract adventurers from across the continent.’

In third place Xishuangbanna, meanwhile, ‘intensive domestic investment in tourism infrastructure and the completion of the high-speed China-Laos Railway project’ have put the region ‘on track to regain its ancient status as a central hub of Southeast Asian travel and trade’.

Kent’s Downs and Heritage Coast is the only UK top 10 entry, earning its place ‘thanks to its commitment to sustainable tourism initiatives’, which include the regeneration of the historic towns of Dover and Folkstone, and plans to establish a Biosphere Reserve and secure the Strait of Dover as a Unesco World Heritage Site.

When it comes to choosing the world’s best places to visit, Lonely Planet’s lists start with nominations from Lonely Planet’s community of staff, writers, bloggers, publishing partners and more. Its panel of travel experts then whittle the nominations down to three top 10 lists, choosing each winner based on its ‘topicality, unique experiences, “wow” factor and ongoing commitment to sustainable tourism practices’.

Tom Hall, Lonely Planet’s VP of Experience, says of the Best in Travel 2022 lists: ‘After an enforced hiatus, it’s time to take those long-postponed travel plans off the shelf and make them a reality and the lists celebrate the world in all its wonderful enticing variety.

‘As always Lonely Planet’s Best in Travel delivers new takes on popular destinations such as Iceland, Norway, Slovenia and Dublin, Ireland, and unearths some of the gems on our doorstep like the Kent Downs Heritage Coast and arguably Germany’s most sustainable city, Freiburg.’