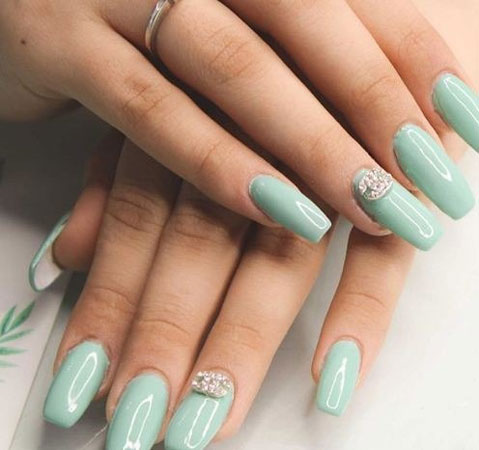 For most New Yorkers, most of the time, Times Square is a challenge. Walking through the crowds of tourists, vendors, break dancing crews and multiple Elmos and Iron Mans can be daunting when you’re just trying to make it to work.

But it’s also disturbing to see the area nearly cleared out, as it was last year during the pandemic. As pedestrians slowly begin to fill the area again, a monument has been erected for those who have been there through it all.

“A Fountain for Survivors,” created by Pamela Council, an artist whose works are steeped in Black American culture, is an 18-foot fountain embellished with more than 350,000 acrylic nails, on display in Times Square until Dec. 8.

The hundreds of thousands of acrylic nails used for the structure vary in size, from tiny toenail length to rectangular talon. Some are painted pale pink with a white tip. Some are magenta, gold and yellow. Others are bedazzled with rhinestones and crystals. A few feature hand-painted designs by local nail artists.

Many are fanned out across the carapace of the fountain, which forms a curvy, bulbous shape around it, resembling a 3D rendering of an organ from an anatomy book. Pink and magenta clouds are painted on the inside of the structure, and the ceiling is tufted with a silk fabric, a gold light fixture holding it together in the middle.

The fountain in the middle of it all contains 100 gallons of water, which trickle down three levels into a large fuchsia cauldronlike dish.

As one walks into the art piece, the loud music from dance crews, the murmur of the crowd and the bright lights of the billboards seem to fade away. In the middle of the chaos of Times Square, the space is serene and dreamy, the sound of water calming the senses. “The fingernails become this sort of armour and this protective style layer, in between the buzzing Times Square public and people who are visiting this intimate space,” said Council, who uses they/them pronouns, in a recent interview.

The nails also symbolize self-expression and the small acts of personal upkeep that many people rely on – or ritualize – in order to persevere on a daily basis.

“We build monuments to winning wars and tragedies, but I need a monument to maintaining,” Council said. “For some people that is monumental.”

Before the pandemic, more than 300,000 people walked through Times Square on any given day, according to the Times Square District Management Association. But last year, the pedestrian count plummeted to fewer than 50,000 people per day.

“There are fewer people moving throughout Times Square, but the people who are, are working people, they’re the people that keep things running, they are the essential workers that we have been talking about for the last year and a half,” Council said.

Now, with 64 percent of New Yorkers fully vaccinated, the city is rebounding. In September, there were nearly 219,000 people back in Times Square. The fountain was unveiled last week in Duffy Square, a small plaza in the northernmost triangle of Times Square. “Survival felt like a very universally urgent notion that people from all walks of life and experiences could identify with in this moment,” said Jean Cooney, the director of Times Square Arts, the public art arm of the Times Square Alliance and the organization that commissioned the work, “whether that idea around survival was for them related to the pandemic or something more personal.”

It was Council’s lens on survival, which is punctuated by joy and gloomy humour, that Cooney felt could bring a much-needed levity to the area.

According to a New York City Comptroller’s report from March 2020, 75 percent of all frontline workers at the beginning of the pandemic were people of colour. More than 60 percent were women. That reality contributed to higher rates of mortality from COVID-19 among people of colour and worsened already persistent economic inequalities. Valerie Wilson, the director of the Economic Policy Institute’s Program on Race, Ethnicity, and the Economy, remarked on the pandemic’s disproportionate toll on Black and brown communities in the city: “I think that we are at a time now where there seems to be some greater acknowledgment of the traumas that are created by racism and racial inequality,” Wilson said. “That is important to counteracting the idea that Black people are simply being resilient. You do what you have to do but what is the cost?”

Council’s fountain is an offering to those survivors and to all survivors, more generally. “With fountains, you can make these offerings and dedications on a civic scale,” they said.

Council has worked with acrylic nails before. In 2012, the artist created a sculpture called “Flo Jo World Record Nails” that used 2,000 acrylic fingernails to shape a replica of a track course in honour of the 200-meter course where track and field athlete Florence Griffith Joyner made history.

Council used the same materials for “A Fountain for Survivors,” but this time the artist is celebrating not an individual achievement, but offering a moment of respite to anyone within the city. “Their fountain is something really different and completely unexpected. At the same time, they’re using these materials that you’ve definitely seen before,” Cooney said of Council. “We all understand acrylic nails, but I’ve never seen 400,000 of them in beautiful and vibrant mosaics. It’s a little bit of something incredibly accessible and familiar, but turned into something completely spectacular and unexpected.”