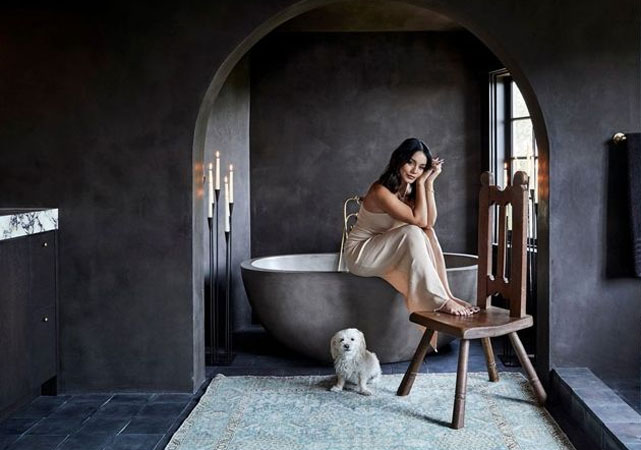 Vanessa Hudgens has found the perfect place to break free. When she’s not traveling across the globe, the 32-year-old has found the perfect place to plant her roots…literally. Vanessa opened the doors and invited Architectural Digest inside her stunning Georgian home, which she has filled with plants, European touches and iconic nods to Old Hollywood.

“I wanted an old home,” Vanessa told AD. “To me, there’s something so romantic about that. A home with character and quirks. I love the Old Hollywood elements.”

Vanessa wasn’t just moved by the home’s interior; it was the checkered history that got her as well.

Director Cecil B. DeMille built the house, called the “The Little DeMille,” in 1922 for his mistress. Inside, Vanessa pays homage to the man himself, with a vintage movie poster in the entrance.

And that’s not the only famous face watching over her household.

There’s also a portrait of actress Natalie Wood in her living room and one of Marilyn Monroe hanging in her powder room, because, according to Vanessa, “That’s what you want to see when you go into the bathroom. You feel safe.”

The home, which she purchased in 2018, was designed with the help of interior designer and friend Jake Arnold, along with Vanessa’s High School Musical co-star and bestie, Ashley Tisdale.

Like many of us, Vanessa used her time during the pandemic to do some home remodelling, and she focused on the kitchen.

“During the pandemic I was home so much, I was like ‘This would be the time to do a remodel for the kitchen,’ and so I took it upon myself to have a project and put it all together,” she shared.

Now Vanessa’s kitchen includes a breakfast nook that gets used more for dancing than eating. “I eat here when it’s like one or two of my other friends,” she said. “We normally just end up dancing around the table. It ends up just being a really great dance floor.”

Upstairs in her bedroom, the vibe is very “feminine” and “a celebration of the female form.” The orange colour scheme includes velvet curtains and a textured quilt. The bathroom is more of a “cave” where she spends a lot of time in the bathtub.

Outside of her home, Vanessa’s space includes numerous fruit trees, a brick pizza oven, extra foliage and limestone tile, which all give the feel of a European retreat. In addition, she has a large space perfect for tapping into her inner child.

“I really wanted a place that you could really just run around in and kind of feel like you have a park,” she said. “It’s just so nice to have a space that’s open in LA that allows me and my friends to feel like big kids.”