‘Hellbound’ — Netflix raises the stakes with another Korean series 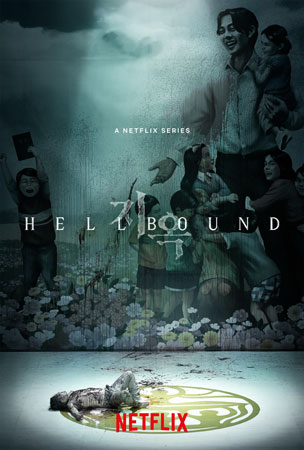 After Squid Game, Netflix is all set to raise the stakes with their upcoming Korean series Hellbound. Going by the dark trailer, Hellbound looks like the kind of show that will hold the audience’s attention with its intriguing plot and nail-biting execution. The series has been directed by Yeon Sang-ho, known for the zombie film Train to Busan. In the trailer, we see the concept of sin being explored as characters are given warnings that they will die soon. But the warnings are not innocent, rather they look quite deadly and leave a haunting effect. The show appears to be exploring a supernatural concept through some straight-headed protagonists. The synopsis of the show reads, “Unbelievable demonstrations of hell take place in the middle of Seoul right in front of crowds. Mysterious beings condemn individuals to be hellbound, and otherworldly beings appear exactly at the specified time to kill the condemned in a brutal burning. Rising above the utter chaos resulting from these inexplicable supernatural occurrences is the commanding voice of Jung Jinsu, the leader of an up-and-coming religious organisation, The New Truth.