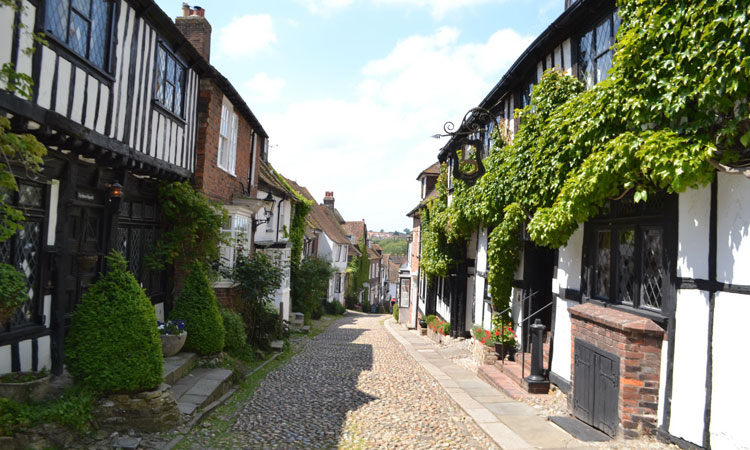 En-suite bathroom? Check. Restaurant and bar? Check. Mysterious footsteps, spectral hounds and phantom pianos being played? Check. Welcome to some of Britain’s most haunted hotels and inns, accommodation steeped in history – and writhing in wraiths.

Too nervous to spend the night? Some of the properties here offer guided tours of their most spine-chilling spots. Read on to find out where to go for the ultimate spooky stay.

THE MERMAID INN, RYE, EAST SUSSEX — the Mermaid Inn in the medieval town of Rye has extremely impressive spookiness credentials.

The building dates back to the 12th century and was once the stronghold of the infamous Hawkhurst smuggling gang. Now, it’s spectre central, with an appearance in the first series of Most Haunted cementing its reputation as a ghost hunter’s paradise. ‘We think there are six ghosts here at The Mermaid,’ says inn owner Judith Blincow. ‘One thing that sometimes happens is guests’ clothes being mysteriously moved from one chair to another in the night.’

Book a stay in Room 1 and keep a beady eye out for a lady in white or grey sitting in a chair by the fireplace. And if you leave clothes draped over a chair and wake up to find them soaking wet, you won’t be the first.

Room 17 is said to be where the ghost of the Hawkhurst gang founder’s wife lurks. Past guests told of waking in the night and seeing the chair rocking as an icy chill enveloped them. The chair disturbed so many patrons that it was eventually removed.

BROOK RED LION HOTEL, COLCHESTER, ESSEX — the Grade 1-listed Red Lion Hotel is immersed in history and looks the part, with bountiful ancient wooden beams inside and out.

It’s located in the centre of Colchester – which claims to be Britain’s oldest recorded town, designated the capital city of Britain by the Romans over 2,000 years ago – and, dating back to 1485, is the oldest building within it.

On the hauntings front, there are said to be three ghosts that roam the rooms and corridors. The most famous is that of Alice Catherine Millar, a woman who was murdered in the inn in 1638. Both guests and staff have reported seeing her in rooms five, six and 10, as well as in the kitchen and halls.

Apparitions of a young boy and a hooded monk have also been seen, while recent eerie guest experiences include hair being pulled and a woman’s voice mysteriously appearing on a video taken in one of the rooms.

LITTLECOTE HOUSE, BERKSHIRE — Littlecote House Hotel in Berkshire was built in the early 1500s and has hosted many notable figures, including Henry VIII and Jane Seymour and George VI and Prince Philip.

The hotel is also known for multiple notable hauntings, enough to give it the goosebump-inducing accolade of England’s third-most-haunted building.

The spectral guest list includes a black dog that appears on the hotel’s Jerusalem staircase and a ghostly woman seen rocking a baby in the corner of one of the bedrooms during a seance.

If you’re not brave enough to spend the night there, but still want to soak up the mysterious atmosphere, you can book a place on to one of the hotel’s popular ghost tours.

CHILLINGHAM CASTLE, NORTHUMBERLAND — Chillingham Castle is a 13th-century, Grade I-listed stronghold in Northumberland famed not only for a number of battles but also for its history of hauntings.

As the castle’s website says, it reputedly has some of the highest levels of paranormal activity in the country.

One resident wraith is the white pantry ghost – a frail figure who sometimes appears in the castle’s inner pantry.

There is also a pair of voices, we’re told, that can be heard talking in the chapel. It is never possible to follow their words and they appear to stop talking if you make efforts to trace them. Chillingham offers guided evening ghost tours, with highlights including the old torture chamber and banquet hall. ‘Are you brave enough?’ the castle asks.

FISHERMAN’S COT, TIVERTON, DEVON — Fisherman’s Cot, perched quaintly on the banks of the River Exe in the tranquil Devon countryside, is said to be haunted by the ghost of a young woman, who makes her presence known by giggling in the bar. She’s also been seen wandering the halls.

Others report seeing a headless horseman riding over the nearby 14th-century Bickleigh Bridge. It’s believed he was a parliamentary soldier who lost his head as he joined the siege to capture Bickleigh Castle.

The hotel boasts a variety of historical buildings, a restaurant, a bar, beautiful landscaped gardens and 20 en suite bedrooms.

Plus there’s a ghost, reportedly that of a nun who was killed by being bricked into a wall at a nearby abbey.

Both guests and staff report seeing her and believe she is responsible for all sorts of spooky activity, while a smoke-like figure holding a Bible has also been spotted roaming the halls.

THE ANGEL & BLUE PIG, LYMINGTON, HAMPSHIRE — the Angel and Blue Pig dates back to the 13th century and is haunted by enough ghosts to give it the reputation of being one of the most haunted pubs in Britain.

One is that of a former coachman who has been spotted in the kitchen with his face pressed up against the window.

On various other occasions the sound of someone playing a piano has been heard by guests in the bedroom next door to the old ballroom. However, there is no piano. Other sightings include a man in a naval uniform in the pub area and the figure of a woman on the second floor.

THE BELL HOTEL, THETFORD, NORFOLK — the quaint 15th-century Bell Hotel in the market town of Thetford is full of character and history – and a dream location for ghost hunters.

One of The Bell’s 46 rooms is reportedly haunted by a hooded monk, while the drawing room on the ground floor is where some say they have seen the ghost of Elizabeth Radcliffe, who was once the landlady of the inn.

Other strange activity includes unexplainable smells, the sudden appearance of what feels like icy breath and a time-honoured classic – mysterious footsteps.

THE PRINCE RUPERT HOTEL, SHREWSBURY, SHROPSHIRE — Medieval Shrewsbury is renowned for its chocolate-box black-and-white timbered buildings – and for being one of the most haunted places in England.

And the Prince Rupert Hotel is one of the paranormal hotspots.

It dates back to 1150 and was once home to Prince Rupert, the grandson of King James I. This four-star hotel houses several ghosts including a man wearing a nightshirt who has been spotted in the corridors and a sleeping soldier who has been seen floating aimlessly around.

The hotel’s Prince Philip Suite is said to be haunted by a jilted bride, while the ghost of a maid called Martha has been witnessed wandering the stairs nearby.

THE SWAN, LAVENHAM, SUFFOLK — The Swan in Lavenham, which dates back to the 15th century, is supposedly haunted by a housekeeper who once lived there when the hotel was a coaching inn in the 19th century, according to hauntedrooms.co.uk. The woman, who fell pregnant out of wedlock, was due to marry the baby’s father. However, she was left standing at the altar on her wedding day and was later found hanging in the housekeeping quarters – or what is now room 15. Several guests have reported seeing her standing in the room in the middle of the night. One person even said they woke up and felt the ghost tickling their feet.