Shoaib Akhtar walks off TV show after being humiliated by anchor 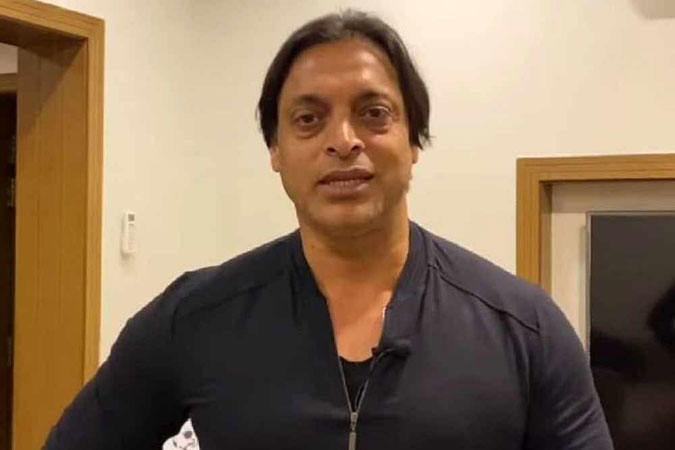 LAHORE: Following Pakistan’s win over New Zealand on Tuesday night, one would think the post-match analysis would be the primary thing people were talking about but instead, the limelight was on the spat between Shoaib Akhtar and anchor Nauman Niaz. Akhtar, a legendary former fast bowler, quit and walked off a Pakistan Television (PTV) show after being “insulted” by Niaz. The two were part of a panel for PTV Sports programme “Game On Hai” along with guests such as West Indies batting legend Sir Vivian Richards, former England captain David Gower, former Pakistan women’s captain Sana Mir and former fast bowler Umar Gul. The panel was discussing the Pakistan-New Zealand T20 World Cup match which Pakistan won by five wickets.During a discussion on the Pakistan squad, Akhtar credited the Pakistan Super League’s Lahore Qalandars franchise for discovering Shaheen Shah Afridi and Haris Rauf.

Niaz took issue with Akhtar’s comments and said: “You are being a little rude so I don’t want to say this but if you’re being over-smart then you can go. I am saying this on air.” Once the show resumed after a break, Akhtar apologised to the guests on the panel and announced his resignation from PTV, saying that he could not continue with the programme because of “how I was treated on national television”.The incident soon became viral on social media with the two individuals becoming top trends on Twitter and videos of the confrontation circulating which prompted Akhtar to issue a video message to “clarify” the situation.

However, in another snippet from the show, Akhtar can be seen telling Niaz to let the audience know “it was all planned. What we did is just try and get more TRP (television rating point)”, adding that the anchor was a “favourite guy” of his and he liked to “pull his legs”.Akhtar, in a tweet, rejected the notion that it was a pre-planned move to boost TRP as he gave context to his own remarks that on face appeared as an admission of it being a stunt.

Terming the entire thing as an “unpleasant” incident, Akhtar said Niaz was being “obnoxious” and had asked him to leave for “no rhyme and reason”.”He sidelined me after abruptly insulting me – a national star – on national TV and then went on break. I realised that superstars and foreigners are sitting and what image would be delivered so I asked Nauman to end the matter otherwise what you’ve done with me will go viral and there will be no solution to that.”The former fast bowler said he had asked the anchor to apologise to him but Niaz did not which compelled him to leave the show. “I tried my level best to repair the damage [in] the programme,” Akhtar added.

The incident caused an uproar on social media with politicians, journalists and mediapersons coming to the former cricketer’s defence and criticizing Niaz for his behaviour.PTI Senator Faisal Javed Khan said it was a matter of “prestige and dignity” and had been very “unprofessionally handled”. He said there would be a standing committee meeting on the issue as well.He chided PTV for going “completely off track” and called on the state broadcaster to “restore the legacy”.