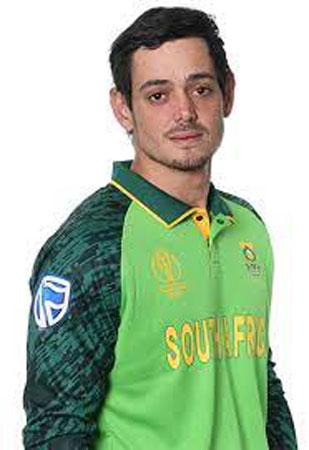 JOHANNESBURG: Quinton de Kock’s refusal to take the knee at the T20 World Cup, despite the potential cost to his career, divided opinion in South Africa on Wednesday and highlighted persistent concerns about racism in sport.”Gone are the days when cricket was the standard-bearer of progress, unity and inclusivity in the country; that flag is arguably now being flown by SiyaKolisi’s Springboks,” wrote News24 columnist Pieter du Toit in reference to the country’s Rugby World Cup winners.”Add to that the dire administration of the game, with allegations of mismanagement and corruption, and the normal peaks and troughs of a sports team, and cricket is at a low point.”Former Test captain De Kock on Tuesday pulled out of the World Cup Super 12 match against holders West Indies after Cricket South Africa ordered all of its players to take a knee ahead of every game at the tournament in the UAE.

“De Kock divides opinion” read a banner on news channel eNCA, where commentators debated his right to self-expression against his responsibility to support his team and his nation.A hashtag #IStandwithQuinton started appearing, especially among right-wingers, defending his right to dissent.However, many agreed that there will probably be huge implications for De Kock, one of the team’s star players with more than 10,000 runs to his name in international cricket.”This is probably the end of his participation in the World Cup and maybe even his international career as a cricketer,” wrote analyst Max du Preez in column on an Afrikaans news site.

Twitter users noted that De Kock has made hand gestures in support of rhino conservation at matches.”The only sign or symbol that you will see from Quinton de Kock is for the rhinos. For everything else, he STANDS his ground,” tweeted the account Blacks in Whites.Radio commentator BonganiBingwa also noted De Kock’s willingness to embrace other symbols. But like many others, he questioned the wisdom of CSA requiring such gestures.”If Quinton De Kock wears pink for cancer or black arm bands to honour deceased greats or to oppose GBV (gender based violence) when required, why object to a universally accepted gesture to fight racism?” he said.”But equally is it still a principled stand if it’s mandatory?”CSA required players to take the knee after pictures emerged from the team’s first game against Australia at the weekend where some players knelt and some stood.De Kock stood with his arms behind his back. He also refused to take a knee in South Africa’s Test series in the West Indies earlier this year.