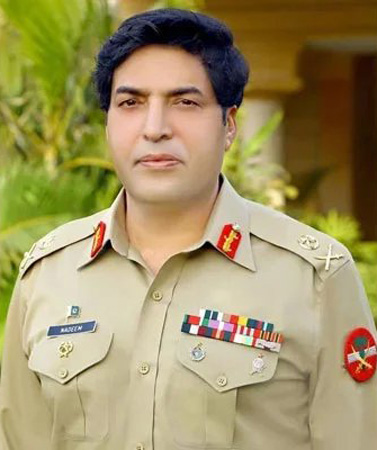 The selection process was finalized after the prime minister interviewed a panel of nominee officers, recommended in a summary, sent by the Ministry of Defence, followed by a consultation meeting with Army Chief General Qamar Javed Bajwa this afternoon. “The prime minister has seen and approved the appointment of Lt Gen Nadeem Ahmed Anjum as director general Inter-Services Intelligence, with effect from November 20, 2021, from the panel of officers at Para 6 of the summary,” a notification issued by the Prime Minister Office dated October 26 said.

Earlier, Chief of the Army Staff General Bajwa called on Prime Minister Imran Khan for consultation over the appointment. The PM Media Office in a statement said “the meeting was part of the ongoing consultation process about the timing of change of command in ISI and the selection of the new DG ISI”.

“During this process, a list of officers was received from the Ministry of Defence. The Prime Minister interviewed all the nominees,” the PM Office said. It said, “After detailed consultative process, the name of Lt Gen Nadeem Anjum was approved as new DG ISI”.

According to experts in defence matters, the procedure for appointment of the ISI director general is neither mentioned in the Constitution nor the Army Act, and all previous appointments were made as per traditions under which the army chief proposes three names to the prime minister who then makes the final decision. Lt Gen Anjum was a commander in Operation Zarb-e-Azb, and was posted inspector-general of the Frontier Corps Balochistan during Operation Radd-ul-Fasaad. He has also commandeered the V Corps Sindh.

Lt Gen Anjum is a graduate of the National Defense University, Islamabad and holds a master’s degree from King’s College London, the ISPR had earlier said. In a notification released on October 6, the ISPR had stated that Lt Gen Nadeem Anjum has been appointed as the new DG ISI and Lt Gen Faiz Hameed as the new Corps Commander Peshawar.

Separately, Prime Minister Imran Khan on Tuesday met Chief of Army Staff Gen Qamar Javed Bajwa. A private TV channel said that it was a separate, one-on-one meeting between the two, initially. Later on, Director General of Inter-Services Intelligence (ISI) Lt Gen Faiz Hameed also joined in. The meeting focused on a review of the internal law and order situation of the country.