* In recent abductions, all Kashmiris were picked by Indian security forces on false charges of having links with freedom fighters 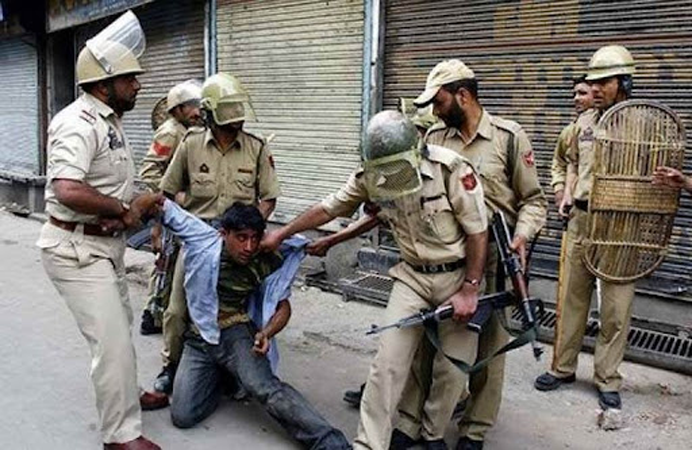 The scars of naked violence and abduction of over one thousand Kashmiris, during the nocturnal raids by the Indian Occupation forces in the valley, would remain fresh in the memories of Kashmiris for a long time to come, as an endless saga of repression and criminalizing dissent, continues.

Although it was not for the first time that the Indian occupation forces assaulted the peace-loving Kashmiris in such a brutal manner, however, the pretexts orchestrated by the Indian authorities this time belie their intention.

In the recent abductions, in the second week of October, all Kashmiris were picked [read abducted] by the Indian security forces on false and fabricated charges, on false charges of having links with freedom fighters.

The American News Agency, Associated Press (AP) described it as a “sweeping crackdown”, launched soon after the targeted killing of some Kashmiris, including members from the minority communities. According to some media reports the “target killings” too was the handiwork of Indian authorities to malign the freedom struggle.

Even the Hurriyat organizations described the killings as the doing of Indian secret agencies and had demanded a probe by the United Nations. However, such a probe could never materialize without Indian approval as it would point fingers towards its own security forces.

This has been proved in several fake encounters in the valley— the recent ones in Shopian, and Srinagar. The dossier presented by Pakistan to United Nations exposed the pre-planning and staging of these encounters wherein innocent people are targeted and dubbed as militants for acquiring ranks and awards.

A dark dimension of this gory situation is the obscurity about the fate of those abducted by the Indian occupation forces, as they have full impunity to do whatever they like.

In the presence of draconian laws like the Unlawful Activities (Prevention) Act (UAPA) and Public Safety Act (PSA), anyone could be put behind the bars without giving them access to justice, as commonly practised in the world.

The Kashmiris too seem to have lost hope in the Indian judicial due to its bias towards the government.

According to Indian security officials, the objective of “picking up” the Kashmiri youth was to torment them and their families and try to quash their desire for freedom. Around 22 detainees, booked under the controversial Public Safety Act (PSA) were shifted from Kashmir to the high-security jail in Agra city of Uttar Pradesh, a local daily, Kashmir Observer Reported in a report.

The prisoners were being kept away from family and made it impossible for their loved ones to have any contact with them.

“This is a criminal attitude and human rights organizations must take notice,” an APHC leader Mushtaq Geelani told APP.

The Indian authorities during the arbitrary abduction campaign arrested anyone they choose; including teachers, journalists and human rights activists.

The Times of India reported on October 10 that the National Investigation Agency (NIA) summoned 40 teachers on Sunday in connection with civilian target killings, the investigation of which the agency has formally taken over from the local police.

In August 2021, AlJazeera quoted local people saying that two years after New Delhi imposed direct rule on the region, arbitrary arrests and intimidation by Indian forces wielding batons and snatching phones have left many too scared to voice dissent.

The news channel reported that thousands were put behind bars. One of the detainees, said, that he believed he was arrested because in the past he had “protested against injustices”.

Another Kashmiri told AFP that he and 30 others were bundled onto a military aircraft to jail hundreds of miles from his home where they were abused and intimidated.

Journalists and Human Rights Activists in Kashmir have also become targets of ruthlessness in Kashmir for exposing Indian crimes and violations. “Journalists in Kashmir have long worked under tremendous stress and have been targeted in the past, some fatally, by both the Indian state and armed groups,” reported AlJazeera, adding many have been arrested, beaten, harassed and sometimes even investigated under the anti-terror laws.

According to reports from IIOJK on October 22, seven journalists were arrested by Indian police during house raids in different areas of the occupied territory during the last two weeks.