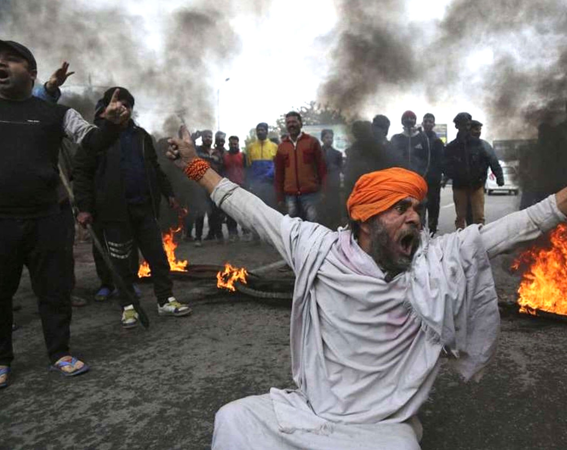 With the rise of saffron terror in India – motivated by Hindutva and backed by government’s systematic discriminatory policies – around 260 million population of minorities in the so-called world’s biggest democracy is facing the existential threat.

Notorious as “saffron goons”, the baton or sword carrying youths attacking and burning worship places of Muslims, Christians, Dalits or Sikhs and killing the community members mark the India of 2021 being ruled by an RSS Pracharak-turned politician Narendra Modi.

According to the available data, Hindus constitute 79.8% of the population, Muslims 14.2%, Christians 2.3%, and Sikhs 1.7%. Groups that together constitute fewer than two percent of the population include Buddhists, Jains, Zoroastrians, Jews, and Baha’is.

Besides backing its militant wings, the BJP government is promulgating discriminatory laws with the sole objective to purge India of all non-Hindu communities. Under the same strategy, India revoked the special status of IIOJK with a view to change its demography by converting Muslim majority into minority.

The Human Rights Watch, in its latest report, said that in February 2020, at least 53 people were killed in communal violence that broke out in Delhi. Over 200 were injured, properties destroyed, and communities displaced in targeted attacks by Hindu mobs.

“A July report by the Delhi Minorities Commission said the violence in Delhi was “planned and targeted,” and found that the police were filing cases against Muslim victims for the violence, but not taking action against the BJP leaders who incited it,” the HRW report says.

The Uttar Pradesh authorities arrested 4,000 people over allegations of cow slaughter under the law preventing it.

The rights watchdog observed that the anti-Muslim rhetoric surged following the outbreak of COVID-19 as the Indian authorities blamed Muslims for spreading the virus through congregational prayers and labelled it as a “Talibani crime” and “CoronaTerrorism.”

Similarly, according to the 2019 government data, crimes against Dalits increased by 7% in India. In varying incidents, 40 Dalit families in Odisha were socially boycotted when a 15-year-old girl plucked flowers from the backyard of a dominant caste family; a Dalit man was stripped for allegedly touching the motorcycle of a dominant caste man; and a Dalit lawyer was killed over his social media posts critical of Brahminism.

The Christian NGO Persecution Relief reported 293 cases of attacks on or harassment of Christians in the country in the first half of the last year, despite the widespread pandemic lockdown.

However, most of the Indian media, which usually posed as a champion of human rights and have been unnecessarily blaming Taliban in Afghanistan for human rights abuses, turns a blind eye to their domestic situation.

Even the repeated calls by the human rights watchdogs and the United Nations could not change their Hindutva mindset and make them speak for truth.

As India is a 1.3 billion people market, the international players too seldom speak against human rights abuses in India.

The human rights situation in India was not discussed by former US President Donald Trump even during his visit to the country. The European Union failed to publicly raise concerns on India’s deteriorating human rights record.

However, the UN High Commissioner for Human Rights Michelle Bachelet voiced concerns over human rights violations in Jammu and Kashmir.

The Indian parliament passed the CAA in December 2019 to provide an expedited path to citizenship for Hindu, Sikh, Buddhist, Jain, Parsi, and Christian migrants from Pakistan, Afghanistan, and Bangladesh but excluded similarly situated Muslims, Jews, atheists, and members of other faiths.

After the Indian unilateral action of August 5, 2019 in IIOJK, the Indian authorities massively arrested people to prevent protest demonstrations.