* The vote saw no real opposition candidates challenge Mirziyoyev, who came to power in 2016 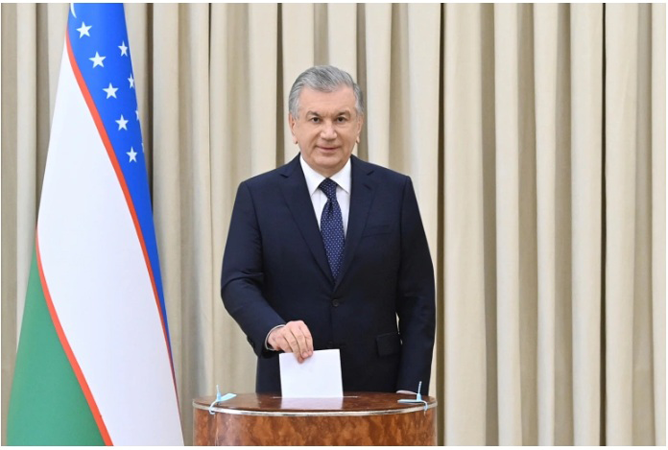 Uzbekistan’s President Shavkat Mirziyoyev cruised to victory on Monday in an election monitors ruled was “not truly competitive” despite some reforms in the authoritarian Central Asian state.

The vote Sunday saw no real opposition candidates challenge Mirziyoyev, who came to power in 2016 after the death of his mentor, dictator Islam Karimov, who ruled Uzbekistan for 27 years.

The Central Election Commission said Mirziyoyev had taken 80.1 percent of the vote, according to a preliminary count.

He has been credited with launching what he calls “New Uzbekistan” by ending a decades-old system of forced labour with roots in the former Soviet Union and introducing limited media freedoms.

Nevertheless, he has continued to publicly praise Karimov, whom he served for 13 years as prime minister after stints in charge of provincial administrations.

Making a tightly controlled appearance at the Humo sports arena in Tashkent after results were announced, Mirziyoyev said “Uzbekistan will only go forwards!”

But like Karimov, the new leader has sidestepped political reforms that would allow any alternative to his rule.

A mission led by the Organization for Security and Cooperation in Europe said Sunday’s polls were “not truly competitive” and pointed to “the exclusion of opposition parties”. “Significant procedural irregularities were noted on election day,” it added.

Elections chief Zainiddin Nizamkhodjayev insisted the elections were held “on the basis of international standards and meet international norms”. Before results were announced, Russian President Vladimir Putin congratulated the 64-year-old Uzbek leader on “a convincing victory”.

BACKSLIDING ON REFORMS: Kamoliddin Rabbimov, a political scientist, said Sunday’s elections showed that Uzbekistan was not a democracy, “but no longer a dictatorship of the Karimov type.”

The coming years would see some reforms continue without a full transition to democracy, he predicted.

“People are worried about the monopolies that control over 70 percent of the economy, about corruption,” Rabbimov told AFP.

“Mirziyoyev will listen and attempt reforms because returning to the strong repressions of Karimov is no longer an option.”

Mirziyoyev has overseen a boom in foreign tourism in the country that counts China and Russia among its partners. But rights groups say the past two years have seen a crackdown on dissent, particularly on internet freedoms that bloomed after 2016.

One would-be independent challenger to Mirziyoyev, academic Khidirnazar Allakulov, fell at the first hurdle after failing to register a party that could nominate him.

Mirziyoyev has overseen growing economic ties with Russia and China, but has held back on rejoining a Moscow-led military bloc Uzbekistan left in 2012. He has also called for engagement with the new Taliban government in Kabul.