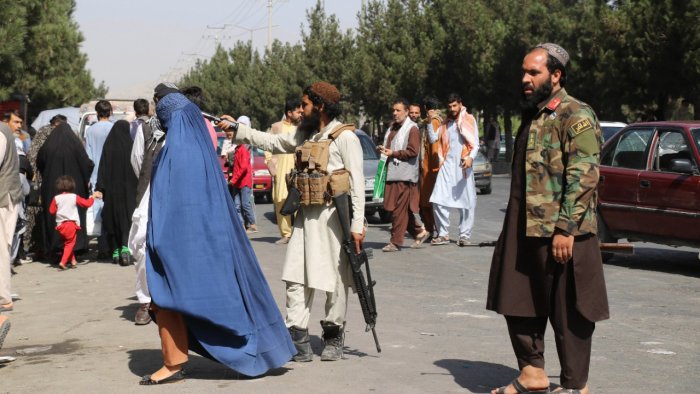 ISLAMABAD: Pakistan has been consistently asking the international community to help Afghanistan avert the looming humanitarian crisis as a fallout of the exit of foreign troops in August.

The call of Pakistan for international aid to Afghanistan has become more relevant after its interim government launched a programme to offer wheat in exchange for labour to fight hunger and unemployment.

The security experts believe that Afghanistan’s ‘food for work’ scheme is in fact signalling a looming humanitarian crisis.

The scheme, to tackle hunger and unemployment, will be rolled out in major Afghan towns and cities and employ 40,000 men in the capital alone.

“This is an important step for fighting unemployment,” Afghanistan’s spokesman Zabihullah Mujahid said at a press conference in Kabul, adding that the labourers must “work hard”.

Afghanistan, which is already suffering from poverty, drought, electricity blackouts and a failing economic system is now facing the onset of what may be a harsh winter, the AFP reports.

The two-month programme will see 11,600 tons of wheat distributed in the capital, with about 55,000 tons for elsewhere in the country, including Herat, Jalalabad, Kandahar, Mazar-i-Sharif and Pol-i-Khomri.

The work for the labourers in Kabul will include digging water channels and catchment terraces for snow in the hills to combat drought.

A humanitarian crisis is imminent as the United States continues with its step to sanction the new government in Afghanistan and block access to over $9 billion held in its banks.

The war-ridden country has suffered a lot over four decades of hardships.

The security analysts say that relief for Afghans is still a distant dream even after the exit of regional forces.

With winters setting in, Afghans are likely to face even worse. It is time for the international community to act and act fast to avert a looming crisis, they said.

United Nations High Commissioner for Refugees (UNHCR) Filippo Grandi has called on countries worldwide to engage with the Taliban’s interim government in Afghanistan or risk a “humanitarian crisis” resulting from the collapse of the state.

According to Ministry of Foreign Affairs of Finland, approximately half of the 40 million people in Afghanistan are estimated to need humanitarian assistance. As many as 8.7 million people would need long-term and consistent assistance.

As per the report of UN’s Consolidated Appeal Process (CAP), the need for humanitarian aid in Afghanistan in 2021 was estimated to be EUR 1.3 billion.

On September 1, Foreign Minister Shah Mahmood Qureshi at a joint press conference with his German counterpart Heiko Maas had said that “This is a pivotal moment in Afghanistan’s history. The international community must remain engaged.”

Pakistan has so far sent 53 trucks and four C-130 aircraft carrying a total of 1,096 tonnes load of humanitarian aid comprising food items, medicines and shelter to Afghanistan from September 9 to October 21.

It also collaborated with Turkey for the dispatch of another nine trucks assistance carrying 146.7 tonnes of food and medicines.

On October 20, Pakistan was among the 10 regional countries at the Moscow Forum that asked for the need to support Afghanistan to avert an economic and humanitarian crisis.

Pakistan along with other States at the Forum asked for convening an urgent UN donor conference on Afghanistan, suggesting that the main burden be borne by the forces whose military contingents had been present in this country over the past 20 years.