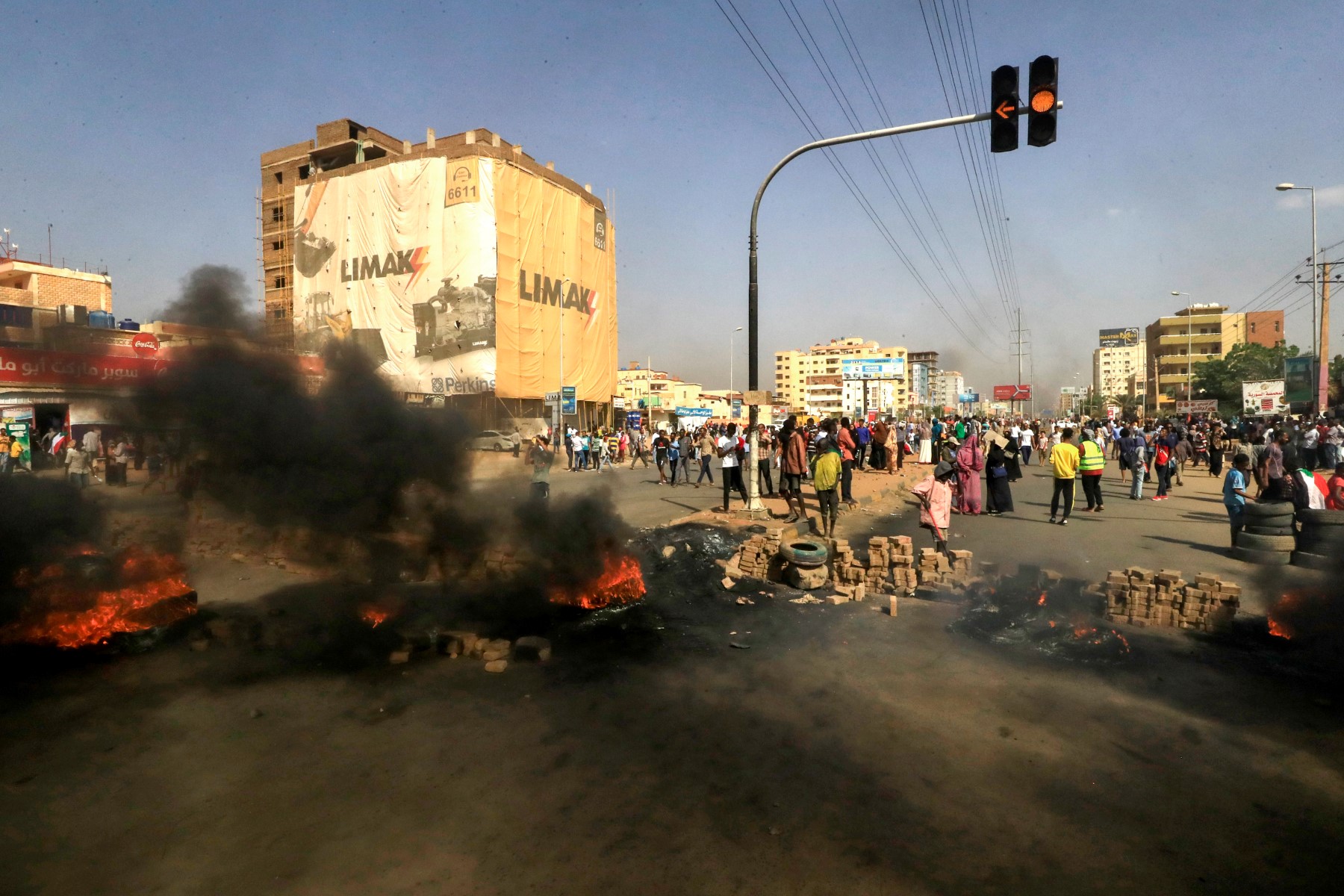 Sudan state television said the chairman of the country’s ruling body, General Abdel Fattah al-Burhan, would speak shortly, after the information ministry said a “coup” was underway on Monday.

Soldiers had earlier stormed the headquarters of Sudan’s state broadcaster in the capital’s twin city of Omdurman, the ministry said.

Armed forces detained Sudan’s prime minister over his refusal to support their “coup” on Monday, the information ministry said, after weeks of tensions between the military and civilian figures sharing power since the ouster of autocrat Omar al-Bashir.

Civilian members of Sudan’s ruling council and ministers in Prime Minister Abdalla Hamdok’s transitional government had also been detained, the ministry said in a statement on Facebook.

Internet services were cut across the country and the main roads and bridges connecting with Khartoum shuttered, it added.

Soldiers stormed the headquarters of Sudan’s state broadcaster in the capital’s twin city of Omdurman, the ministry said, as patriotic songs were aired on television.

People took to the streets, setting tyres abaze and piling rows of bricks across roads to block them in protest against the military move, an AFP correspondent said.

“They have been led to an unidentified location,” it said.

It added that “after refusing to support the coup, an army force detained Prime Minister Abdalla Hamdok and took him to an unidentified location”.

America’s Special Envoy for the Horn of Africa Jeffrey Feltman said “the US is deeply alarmed at reports of a military takeover of the transitional government”.

“Any changes to the transitional government by force puts at risk US assistance,” Feltman said on Twitter.

The United Nations described the detentions as “unacceptable”.

“I am calling on security forces to immediately release all those unlawfully detained or put under house arrest,” said Volker Perthes, chief of the UN Integrated Transition Assistance Mission in Sudan.

“The EU calls on all stakeholders and regional partners to put back on track the transition process,” EU foreign affairs chief Josep Borrell tweeted.

The Sudanese Professionals Association, an umbrella group of trade unions which were key in leading the 2019 anti-Bashir protests, denounced what it called a “military coup” and urged demonstrators “to fiercely resist” it.

The developments come two days after a Sudanese faction calling for a transfer of power to civilian rule warned of a “creeping coup”, at a news conference that was attacked by an unidentified mob.

Sudan has been undergoing a precarious transition marred by political divisions and power struggles since Bashir was toppled in April 2019.

Bashir, who had ruled Sudan with an iron fist for three decades, is behind bars in Khartoum’s high security Kober prison.

The ex-president has been wanted by the International Criminal Court for more than a decade over charges of genocide, war crimes and crimes against humanity in Sudan’s Darfur region.

Since August 2019, the country has been led by a civilian-military administration tasked with overseeing the transition to full civilian rule.

But the main civilian bloc — the Forces for Freedom and Change — which led the anti-Bashir protests in 2019, has splintered into two opposing factions.

“The crisis at hand is engineered — and is in the shape of a creeping coup,” mainstream FFC leader Yasser Arman told Saturday’s press conference in Khartoum.

“We renew our confidence in the government, Prime Minister Abdalla Hamdok, and reforming transitional institutions — but without dictations or imposition,” Arman added.

Protesters took to the streets in several parts of Khartoum carrying the Sudanese flags.

“Civilian rule is the people’s choice,” and “No to military rule”, some of them chanted.

“We will not accept military rule and we are ready to give our lives for the democratic transition in Sudan,” said demonstrator Haitham Mohamed.

“We will not leave the streets until the civilian government is back and the transition is back,” said Sawsan Bashir, another protester.

Tensions between the two sides have long simmered, but divisions ratcheted up after a failed coup on September 21 this year.

Last week tens of thousands of Sudanese marched in several cities to back the full transfer of power to civilians, and to counter a rival days-long sit-in outside the presidential palace in Khartoum demanding a return to “military rule”.

Hamdok has previously described the splits in the transitional government as the “worst and most dangerous crisis” facing the transition.

On Saturday, Hamdok denied rumours he had agreed to a cabinet reshuffle, calling them “not accurate”.

The premier also “emphasised that he does not monopolise the right to decide the fate of transitional institutions.”

“Feltman emphasised US support for a civilian democratic transition in accordance with the expressed wishes of Sudan’s people,” the US embassy in Khartoum said at the time.

Analysts have said the recent mass protests showed strong support for a civilian-led democracy, but warned street demonstrations may have little impact on the powerful factions pushing a return to military rule.