* From Art Deco architecture in South Beach to contemporary art galleries and museums, Miami is much more than your average fly-and-flop holiday 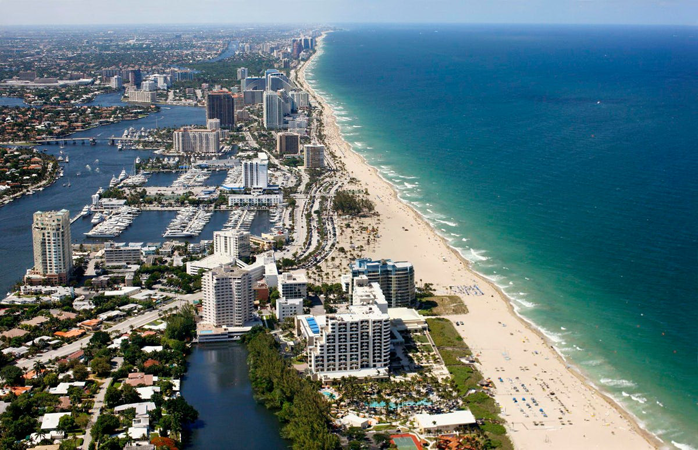 Do you think of Florida as just one big theme park? Think again. With secret islands and sweeping expanses of wilderness, it’s a place where you can really get back to nature and where you’re more likely to see a pelican or heron than a cartoon duck. Not only that, the Sunshine State has a wealth of historic towns and cultural cities and miles of sandy shores.

And as UK tourists are allowed to return from next month, it makes the perfect place for winter sun.

From Art Deco architecture in South Beach to contemporary art galleries and museums, Miami is much more than your average fly-and-flop holiday.

The first stage of a seven-mile underwater public sculpture park and artificial reef is due to open off Miami Beach in December. Back on land, check out Superblue, the new interactive art experience.

Follow everyone from the Beckhams to Britney Spears and stay at The Setai hotel. It’s a great place to kick back, with a private section of beach and three infinity pools oriented to best appreciate sunrise and sunset. For a less expensive option, try Solé Miami in North Miami.

Fancy trying life on the range as a cowboy or cowgirl? Then mosey on over to the ‘dude ranch’ at Westgate River Ranch Resort and Rodeo, set on 1,700 acres in central Florida.

There are campfire nights with rides on hay wagons, singing cowboys, cookouts and a rodeo. You can also try your hand at archery, horse-riding or rock-climbing, or, for something more extreme, there’s bungee jumping and zip wiring.

Stay in a luxury wagon complete with rocking chairs on the deck, a teepee with a rock hearth fireplace and clawfoot bath tub, or in one of the lodge rooms.

An hour’s drive takes you to the Circle B Bar Reserve, a nature reserve on a former cattle farm with a wide variety of hiking trails, including Alligator Alley, where you’ll see the reptiles in the wild.

Book: Seven nights’ room-only in November costs from £799pp based on a family of four, with flights and car hire included. Book direct for luxury glamping in teepees and wagons.

Ocala National Forest is so lush and unspoiled that it stood in for the African jungle in the Tarzan movies.

Not far north of Orlando, it’s another world entirely, with springs and lakes among the oaks and pines. A 116-mile series of roads through the heart of the forest has been dubbed the Black Bear Scenic Byway for good reason, as there is a decent chance of spotting them and even getting up close to them. Go hiking or biking along the trails, take a dip in the lakes or explore the rivers by kayak. There are plenty of local companies that arrange activities.

Perhaps America’s most scenic road trip, the Overseas Highway links evocatively named islands such as Conch Key and Duck Key with a series of 42 bridges.

It’s only 113 miles long, from Key Largo to Key West, but it’s worth taking your time and stopping off along the way.

Go snorkelling around the Christ of the Abyss statue, 25ft underwater in the John Pennekamp Coral Reef State Park, take a fishing trip and get a local restaurant to cook your catch, visit the Turtle Hospital at Marathon, and cruise along the historic Seven Mile Bridge, which you might recognise from blockbuster action films such as True Lies and Licence to Kill.

The end of the road comes at Mile 0 in Key West, the most southerly part of mainland USA. Here, visit Ernest Hemingway’s house, which has about 60 six-toed cats, some descended from the author’s own pet, and celebrate the end of your drive with a key lime cocktail and delicious key lime pie.

Most tourists zip through the Everglades on an airboat, which is well worth doing, but to really experience this subtropical wilderness, stay overnight in a chickee – a traditional indigenous dwelling on a raised wooden platform with palm thatching.

At Everglades Camping, the huts are built by local Seminole Native Americans. They have neither electricity nor water, but there are showers and toilets nearby. There are also rustic cabins which do have electricity. By day, take a tour in boats similar to those used for centuries by tribes to navigate the shallow marshes of alligator-infested cypress swamps, grasslands and subtropical mangrove jungles. Return at night to watch the sun set from the deck.

You can book a hike with a naturalist to spot the Everglades mink and Florida panthers, take photography or bird safaris, and venture out on night expeditions.

Known as the manatee capital of the world, Crystal River is the only place in Florida where you are allowed to swim with the gentle giants.

Up to 1,000 manatees, sometimes known as sea cows, are drawn to the region every winter by the spring system, which provides a warm-water refuge. The springs and rivers are perfect for swimming, kayaking or paddle-boarding. The area is home to state parks, forests and wildlife refuges that are ideal for outdoor activities. Combine a visit with a city break in Tampa.

Book: Four nights in Tampa at The Godfrey Hotel followed by three nights at the Plantation Inn at Crystal River, with flights and car hire, from £1,695pp.

An Ile de Re meets the Caribbean vibe makes Anna Maria island the pick of the west coast islands. Planning restrictions mean the palm trees are often taller than the buildings, and there’s a seven-mile strip of sand with a wooden pier. You won’t find malls or McDonald’s – go instead to The Sandbar to feast on stuffed shrimp, oysters or a fish sandwich as the sun goes down.

Or take a kayak or paddle-board out through the mangroves as you look for dolphins and manatees, then return to one of the toes-in-the-sand restaurants or live music tiki bars.

Book: A week’s self-catering on Anna Maria Island in January costs from £1,744pp with flights and car hire included.

Cigar-lovers should head to Ybor City in Tampa, where the last of about 150 cigar factories that used to exist still operates. On a tour of the JC Newman Cigar Factory, you can learn the history of a secret staircase with links to the mafia and take a cigar-making class.

Stay in the new Hotel Haya as a base to explore Tampa’s food offerings. Start with a Cuban sandwich, a combination of pork, ham, salami, mustard, pickles and cheese. And don’t leave without checking out Bern’s Steak House.

Book: A night at Hotel Haya costs from £145 for a double room.

You can understand why the locals like to keep Amelia Island to themselves. One of the Sea Islands chain between South Carolina and Florida, it has 13 miles of beaches backed by towering dunes, and Spanish-moss-draped oaks instead of palm trees. Spend your days horse-riding on the sand, teeing off at one of the five golf courses, or surf fishing.

Combine with a stay at St Augustine further down the coast, and soak in the history of the ‘Nation’s Oldest City’, founded in 1565 by Pedro Menendez de Aviles of Spain.

Take in Florida’s coastal highlights on this ultimate self-drive tour from Miami.

As well as crossing the 42 bridges of the Overseas Highway, you can tick off stylish Naples with its swish boutiques, the Everglades and the architecture in historic St Augustine. And, if you really can’t keep away from Orlando’s theme parks, you can go to see Mickey on this trip too – although if you’d rather not, you can swap that part of the trip for a stay in Daytona Beach instead.

Arrive in the first week of December and you can enjoy a twin-city cultural break.

Fly in to Miami to see the Art Basel fair. Stay at the Kimpton Angler’s Hotel on South Beach, with its rooftop pool, rooms in coastal colours and geometric-designed bar. Then head west to Sarasota on the shores of the Gulf of Mexico, staying three nights at the Ritz Carlton Sarasota with the chance to see 16-time Grammy winner and songwriter David Foster in concert at the Van Wezel Performing Arts Hall on December 6.

A sliver of land off the south-west coast, Captiva Island has the ultimate get-away-from-it-all feel. Just five miles long, it has no through traffic nor high-rise buildings.

What it does have is the nature reserve of South Seas Island Resort, with a long stretch of sand. There you can learn to sail or take a boat to one of the other small islands off the coast, including North Captiva, tiny Cabbage Key, Cayo Costa and Boca Grande.

After four nights, drive to the busier Naples Bay Resort down the coast, where one of the best boat excursions is to the saltwater mangrove estuary of the Everglades national Park, to spot bottlenose dolphins and osprey, herons and egrets.